The 2022 Vermont SAF State Championship was held July 24th on Lake Champlain. At the end of the day the team of Eric Dessureau and Jordan Farr took 1st place with a five fish limit …

Madison, Wisc. – July 11, 2022 – A small but competitive group of teams gathered on the shore of Lake Waubesa, one of the lakes that makes up the very fishy waters of the Madison …

Isle, Minn. – July 11, 2022 – 28 teams participated in the Minnesota State High School Fishing Championship with the hopes of advancing to the 2023 National Championship in La Crosse, WI. Anticipation was high …

Lake Cascade was good to Kyle Luis & Ryker Memmott. They started for smallmouth early in the morning with only a couple little ones and one nice 2lb, but as the sun came up they …

Each team that qualifies for a regional and/or national championship will receive a travel allowance to help offset expenses. The High School Fishing National Championship winners will also each receive a $5,000 scholarship to use at the university of their choice. END_OF_DOCUMENT_TOKEN_TO_BE_REPLACED 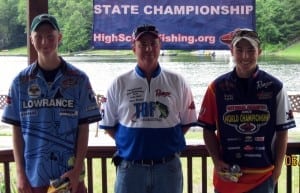 Bethel University once again has four-year scholarship offers for both anglers on the 2011 High School Fishing World Finals Championship Team!

Ponca City, Okla. (June 14, 2011) – The Bass Federation announced today the 2011 High School Fishing World Finals will return to Russellville, Ark., on Lake Dardanelle, July 20-23, 2011.  Bethel University will once again offer four-year scholarships to both anglers on the High School Fishing World Finals championship team.  Last year’s inaugural event saw anglers from 17 U.S. States and this year the field is expected to grow substantially. TBF’s Student Angler Federation (SAF) and the rapidly expanding High School Fishing State Championships, which TBF and FLW Outdoors are holding in every state in 2011, are supporting this pinnacle event.  All SAF affiliated high school fishing club teams are eligible to register.  Tournament waters go off-limits for pre-practice to all competitors at 11:59pm Sunday night July 10 until the first official practice day Sunday, July 17. There’s plenty of time to sign up a new high school club or team; any team can sign up online without a late fee at highschoolfishing.org until online registration closes July 17.  Thousands of dollars in scholarships and prizes are up for grabs, all with NO entry fee! Teams can sign up after that on site at the event with a $25.00 per angler late fee but advance registration is highly encouraged. Official rules and full details can be found at highschoolfishing.org END_OF_DOCUMENT_TOKEN_TO_BE_REPLACED