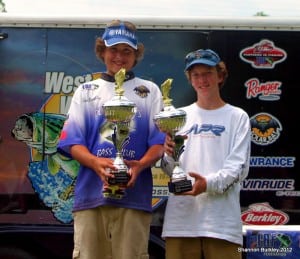 John Burkley and Nikita Slivchenko were the last team to the scales in Saturday’s West Virginia Student Angler Federation High School Fishing State Championship on the Monongahela River in Fairmont, WV. They needed 5lbs and 9 oz to take the lead over Alex Goff and Brandon Tinder from Herbert Hoover High School. As luck would have it, their five fish limit tipped in at six pounds even to win the title in the storm ravaged state that had been hit with 80 mph winds the previous night. 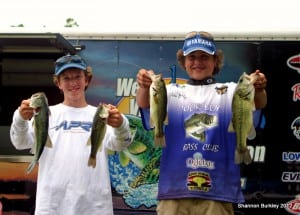 “We’re pretty excited,” stated John Burkley who, along with Slivchenko, will both be freshman next year at Wheeling Park High School, one of the largest schools in the state. “We used a fluke most of the day and we caught several fish, but just had to grind it out to get five that would make the 12” size limit,” commented the smiling duo. “Advancing on to the Regional is going to be fun and a great experience,” they added.

The team of Goff and Tinder also had a five fish limit in their runner-up effort, which found the river conditions very tough with the recent hot weather.

Rounding out the top three were Henry Schomaker and Phillip Browning, reigning State Champs from Westside High School. They had three fish that weighed in at 4 lbs 1 oz.

The West Virginia Bass Federation again proved to be great hosts for the group they also sponsored the “Certified Angler” top prize which recognizes teams for their work in the classroom. That prize also was won by Burkley and Slivchenko as the top finishing team who completed their online testing. 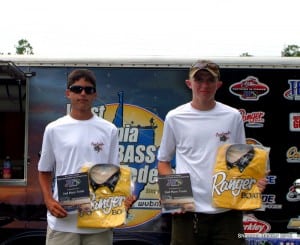 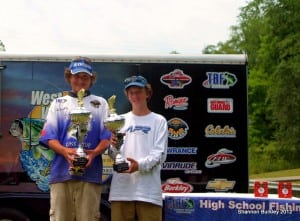