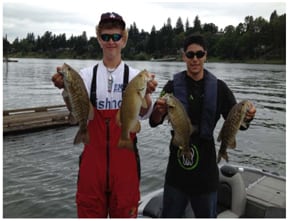 July 1, 2012 – Competitors were faced with high water conditions and unstable weather patterns throughout the week leading up to the start of the TBF Oregon High School Championships. The Willamette River was running higher than normal water levels due to excess rain and being backed up by the Columbia River. The bass were scattered in the river, keeping the contenders on their toes on where to locate fish. The team of Nick Chin and Jacob Wall represented St. Mary’s High School of Medford, Oregon were able to locate 5 good keeper smallmouth bass to bring home the title of 2012 Oregon High School Champions. A combination of using tube baits and crankbaits produced the fish for the team. “We had a pretty good day and worked hard to catch the fish,” said Nick Chin. 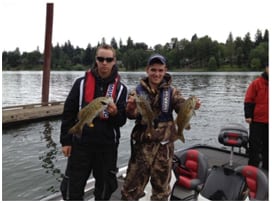 Second place went to the team of Brandon Benedict and Wyatt Seabright representing Thurston High School of Springfield, Oregon. “We had a bunch of top water fish going but just could not get the good ones to stay on the hook,” said Benedict.

For both teams, good bites were tough to come by, but they still managed to find some fish to weigh in at the scales. Congratulations to all of the contenders that participated in the event. 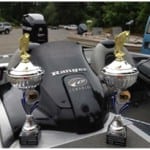 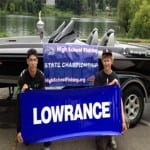 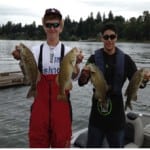 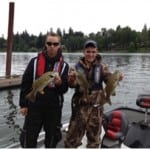