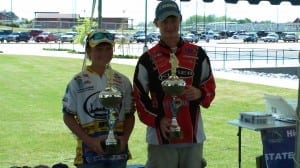 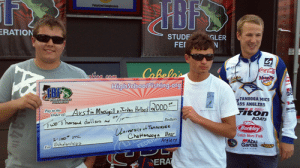 April 9, 2011 (Lake Chickamauga) – Austin Massingill and Jordan Holbert of Soddy Daisy High School were crowned the 2011 Tennessee High School Fishing State Championship on Lake Chickamauga. The team brought in a 5 bass limit that weighed 12 lbs 8 oz. Their win also netted them a $1,000 scholarship to the University of Tennessee Chattanooga, presented by Alex Craw of the University’s bass fishing team. END_OF_DOCUMENT_TOKEN_TO_BE_REPLACED 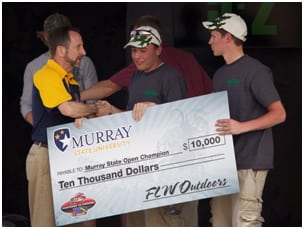 Ohio High School Anglers, Gunner Pollitt and Daniel Sepeck, from Eastern Brown-Bethel Tate High Schools were victorious and were crowned the Murray State Open Champions, and were presented with a $10,000 scholarship check from Murray State.  “I started the day throwing a shaky head on 10 pound Berkley Trilene line and I was dragging chunk rock in about 6 to 8 foot of water. I mainly throw zoom products. That’s really all I did all day,” Sepeck said. Team Member Gunner Pollitt added, “I caught my fish on secondary points throwing a Spinner bait in the morning and dragging PB&J and Missouri Craw jigs in the afternoon.” END_OF_DOCUMENT_TOKEN_TO_BE_REPLACED