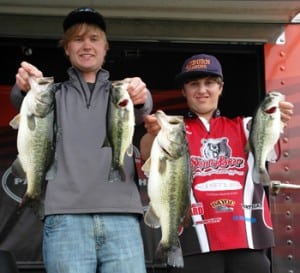 College Scholarships to UT Chattanooga and Much More on the Line

Ponca City, Okla. (Feb. 25, 2011) – The Bass Federation (TBF), in partnership with FLW Outdoors, announced the inaugural Student Angler Federation Tennessee High School Fishing State Championship presented by the University of Tennessee/Chattanooga, April 9 on Lake Chickamauga just outside of Dayton, Tenn. The state championship is a two person team event for students in grades 9 -12. Registration for high school anglers and their “coach,” who will provide the boat, is online at HighSchoolFishing.org or by calling 580.765.9031. Check-in begins at 6pm on Fri., April 8 at the Family Church Gymnasium, with a mandatory rules briefing to follow. We encourage teams to pre-register online or by phone in advance to avoid late registration fees. END_OF_DOCUMENT_TOKEN_TO_BE_REPLACED

The new Cabela’s sponsorship will touch all aspects of the TBF’s adult, youth and conservation programs companywide, not only with national events, but also in every TBF affiliated state federation in the United States and Canada. END_OF_DOCUMENT_TOKEN_TO_BE_REPLACED