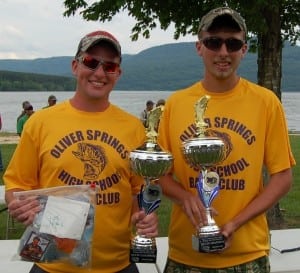 The Bass Federation (TBF), in partnership with FLW Outdoors, the Town of Kimball, and the Tennessee Bass Federation held the 2012 Student Angler Federation (SAF) Tennessee High School Fishing State Championship on Nickajack Lake Saturday, May 12. Forty six boats launched out of the Shellmound Park Ramp near Kimball, Tenn., with over forty teams bringing fish back to the scales that afternoon!  Nickajack Lake, part of the famed Tennessee River system, lived up to all of the anglers expectations as twenty teams brought in five bass limits. All of the students had the opportunity to weigh in their catch using equipment that was provided for by the Tennessee Bass Federation. 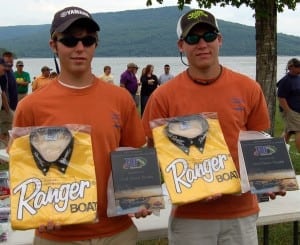 “We started off the morning catching three good keepers on about six or seven casts, less than fifteen minutes after launching,” described Everett. “We were using ¾ oz mop jigs made by Showboat Lures in the Okeechobee Craw color with matching Strike King Rage Craws for trailers.”

The team was fishing an underwater roadbed in 12-16 feet of water that they had discovered and caught quality fish on during practice.  With three in the livewell, the team had to play a little bit of defense as other local anglers saw the team landing keepers and eased their boats over to investigate.  The deep bite quickly died after the initial flurry; however, Mayton & Everett kept switching up lures and presentations for several hours until they decided to try different water around 10am.

Their second spot was a railroad bed similar to the first except that it was in 8-12 feet of water and there was also some fresh grass growing in the area. They switched to throwing solid-body Showboat Lures Swimbaits and shallow running crankbaits. Mayton & Everett picked up keepers four and five by burning the crankbait over the grass. “With about thirteen pounds in the boat we knew if there was any chance that we were going to win, we had to throw big stuff,” said Mayton. “About thirty minutes before we were due back in, we got a big swirl on the swimbait and set the hook. We both thought it was a rockfish because it was stripping drag and just going crazy!”

After a two minute fight, the team landed the fish.  Not only was it a 5.80 pound largemouth bass that would win Big Bass honors, it was the fish that led them to an almost two pound victory sealing their bid to become 2012 Tennessee High School State Champions.

In second place, with a limit weighing 14.72 pounds was Dylan True & Kallen Rochelle representing the Waverly Central High School Tigers.  Waverly Central is located near Kentucky Lake and both anglers commented on using their experience on the Tennessee River system to catch their fish on Nickajack Lake. Finishing in third from the Riverside Christian Academy Knights, Joshua Mills & Conner Fogg caught five bass that weighed 14.54 pounds which included a small penalty for fish care. 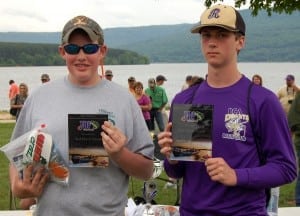 Kimball enough for providing an all-around first class experience for these student anglers and their families!”

Kimball provided a fully catered dinner on the night of registration as well as T-shirts and other fishing goodies for each student angler.  Professional angler and fishing guide, David DuVall, gave a brief seminar on the Yank-Um Mop Jig and provided some background information on Nickajack Lake.  Staff from Sworming Hornet/Yank-Um Rods as well as Wackem Crazy Baits offered all products at a discount to SAF members, boat captains, and family members in attendance.  Members of the UT-Chattanooga Mocs Bass Anglers were on hand to answer any questions students had about fishing at the collegiate level and coverage of the weekend’s events were featured on Channel3Outdoors.com, an affiliate of WRCB in Chattanooga, Tenn.