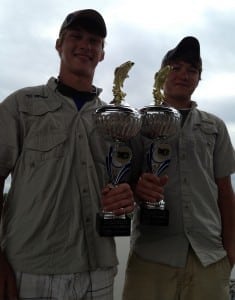 May 12, 2012; Arkansas River, AR – Devin Baxley and TJ Miller of Greenbrier High School were the last team to come to the Verizon ramp scales on Saturday, which set the stage perfectly for one of the most exciting finishes in this year’s Student Angler Federation state championship series.

At that point, Alexander Bartlett and Daniel Vogel from the Pa Briuns were holding a slim one pound lead on the field with their 14.55 lb. catch when the Greenbrier duo brought their winning bag to the scales. After a tense couple of moments the LED readout showed 15.05 lbs. to edge out Bartlett and Vogel by a half a pound to capture the 2012 State title. The team was also the certified Angler award winners. The Arkansas Game & Fish presented the team with a nice prize package that included a nice set of life jackets. 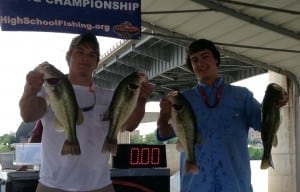 Daniel Schults and Caleb Goss of the Watson Chapel Basscats Club finished third to round out the 62 boat field that braved the rain and river currents on the Arkansas River in downtown North Little Rock.

“This is just great,” commented Miller on their win. “We probably caught 60 fish today and could have had four limits if we had needed them,” added the pair who also finished 4th in last year’s High School Fishing World Finals. “We caught a limit early and culled four or five times throughout the day using a Spro Frog and Strike King Rodents that we flipped in the grass to catch most of our fish,” added Baxley. “I came down here several times with my dad to pre-fish and I felt like we had as good a chance to win as anybody.”

The Lew’s Tackle Company came on board with the Student Angler Federation for this event to sponsor the Big Bass Award. Professional Angler Mark Davis presented Taylor Collier and Colby Stout of Perryville High School with a pair of Lew’s 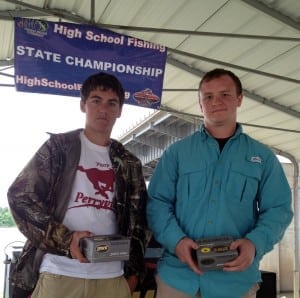 The SAF State Championship series continues with events this week in Mississippi, Colorado and New Mexico.

TBF would like to thank Lew’s Tackle Company for sponsoring the event & Big Bass Award, Kentucky Bass Federation for providing the weigh-in equipment, Arkansas Game & Fish for sponsoring the Certified Angler Award and all the volunteers who helped make this event happen. And a huge thank you to all the parents, mentors, teachers, coaches and boat captains for getting your students involved with high school fishing! 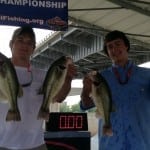 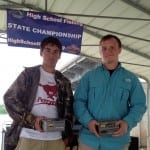 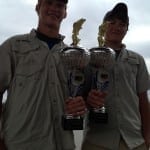 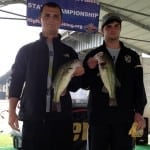