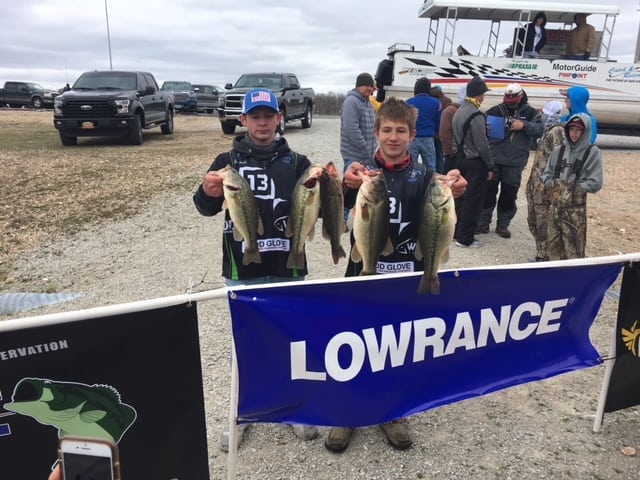 The Missouri TBF hosted the 2018 SAF Missouri High School State Championship on Saturday, April 14 at Truman Lake.   The 2017 championship event hosted just nine anglers compared to this year’s whopping 272 team field.   A warm week of spring weather was followed up on Saturday morning with a cruel trick from Mother Nature and a winter blast with air temperatures in the low 40’s.  Temperatures continued to drop all day with winds switching to the north and blowing at 15-25 mph.  This made it tough and scratched several anglers plans of making  long runs up the Grand or Osage arms to find warmer water and early spawning fish.

While the weather may have been unpleasant, it did not deter a huge field of young, enthusiastic anglers from hitting the water in search of largemouth and spotted bass.  With the help of  Missouri TBF’s new partners, National Youth Fishing Association (NYFA), the event attracted a field of 272 teams.

“This was truly an amazing turnout and a testament to the enthusiasm for high school fishing in Missouri and the quality of the event,” MO TBF President, Dennis Maggert, said.  “The event had outstanding support from the TBF National Office, NYFA staff, local TBF volunteers and Long Shoal Marina.  With the generous support of TBF National sponsors (Lowrance, Ranger Boats, Hummingbird, Minn Kota and Cabelas), state sponsors (Lews & Dobyns Rods) and individual TBF members (Ken Whitfield, Don Heiser and Patrick O’Neal) Missouri TBF was able to give every participant the opportunity to enjoy the fishing and take home several additional prizes.”

Topping the field was the team of Zak Hobbs and Tristian Konenik from Seckman High School (Imperial) with five nice keepers for 16.62 pounds (anchored with a 4.67 pounder).  They caught their fish using a white spinner bait (Indian and Colorado blades). The cold-water temperatures (48-49 degrees) made fish lethargic but they were able to trigger strikes by working the bait slower. They paired the spinnerbait bite with a white bladed jig using a swim bait trailer. Slow rolling the bladed jig triggered some of their bigger bites.

They concentrated on water 4-8 feet deep, focusing on secondary points in a specific cove near the dam. This cove had several wind-blown secondary points which attracted staging fish moving in looking for early spawning spots. They stayed in the same cove all day, bouncing from point to point covering all angles of the point.  Since this was the only place on the lake they found active fish they decided to grind it out.

Both anglers wanted to say a thanks to their boat captain for sitting out there all day in the cold and helping to keep them focused in very tough conditions.  In addition, they wanted to thank their sponsors 13 Fishing, The Rod Glove, Duns Sporting Goods, and Woo Tungsten.

Coming in second was a team from Mansfield High School of Dawson Barnett and Holden Dennis, bagging four fish for 16.11 pounds anchored by a big bass of 6.31 pounds.  They caught all their keepers using a spinner bait and home-made jig.  They had a total of six keepers and several shorts mostly fishing up the Tebo Arm.

The third-place team was made up of Devon Rathbun and Caleb Haines from Parkview High School (Springfield) with a sack weighing 15.45 pounds. They used a citrus shad and chartreuse/black square bill to catch most of their fish but also threw a spinner bait and rock crawler.

Bites were tough with only 8-9 fish but six were keepers and proved to be the right size.  They ran up the Grand arm to some dirtier water and found a warm cove with 55-degree water.  They would like to thank their sponsors and especially their boat captain, Russel Hand, for making that long 20-minute run on a very cold day.

The big bass of the tournament was caught by Cater Fletcher & Jesse Anthony with a 6.51-pound lunker.  The big bass hit a Megabars Jerk bait in pocket on a transition bank from chunk rock to gravel.

The outstanding turnout and commitment by the anglers means that Missouri will be able to send 27 teams to 2018 National Championship held in conjunction with the High School Fishing World Finals.  The pinnacle of high school events will be held at Pickwick Lake in Florence, Alabama from June 26-30.  Contestants will not just be competing for HSFWF’s and national titles but also for scholarships and prizes.  Check out details on the event by clicking HERE.

The Missouri TBF would like to thank all of the participants for their support and cooperation.  The anglers showed great sportsmanship and patience, which is required with such a large field of contestants.  Missouri TBF is sincerely looking forward to having this next generation of anglers advance through the college ranks and into our adult TBF clubs.