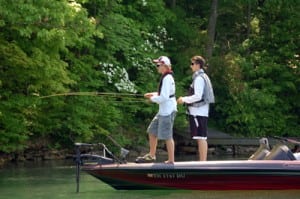 April 23, 2010 – If the excitement of the TBF National Championship wasn’t enough, three High School teams from the Knoxville area competed in a very exciting event at beautiful Melton Hill Reservoir.

Teams from Farragut High School, Oliver Springs High School and Maryville Middle School fished Friday morning in a near perfect setting on one of East Tennessee’s many terrific lakes to help highlight High School Fishing as an up and coming opportunity for student anglers across the country.

At 7:00am all three teams were ready to roll and after handing in their written tests on boater safety, conservation and invasive species all three teams hit the water with nothing but big bass on their minds. All three teams had perfect scores on all three phases of the test that allowed them to add bonus ounces to their final weight

The Maryville Middle School team of Zack Claybaugh and Austin Green headed out with their boat captain Greg Newman to tame the cold waters of Melton Hill. 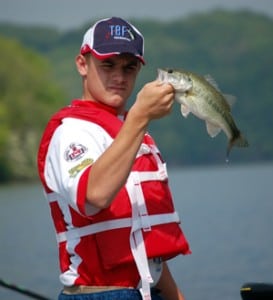 The Maryville club under the direction of Mr. David Clark is one of the best examples in the country of how a club should be organized and function. Their 28 members have already had several club events and Zack and Austin were the point leaders in their club which enabled them fish in this event.

The team caught several short fish but just couldn’t land the ones they needed to pull off the upset of their older counter parts. They did however pick up the 12 bonus ounces of weight for having a perfect score on their test and they won a National award from the TBF for having signed up the most new members of any club in the country during the past year.

Next to the scales was the team from Farragut High School.
Jordon Burdette and Brandon Merical landed two nice Melton Hill beauties including a very nice smallmouth. They too added 12 ounces of bonus weight and moved into the lead with 6 pounds and 6 ounces. These two young men are part of an eight member team that just got started at Farragut and they represented their school very well during the entire event.

That set the stage for our final team from Oliver Springs High School.
Bradley Stringfield and Levi Jackson carried three Melton Hill bucketmouths to Kingston weigh-in stage in front of several hundred fans who had gathered there to watch the TBF National Championship which immediately followed the High School Challenge event.

After adding their 12 bonus ounces for “acing” their written tests the two anglers anxiously watched as weigh master and TBF President Robert Cartlidge hit the lock button on the scales. When the weight of 6 pounds and 9 ounces flashed across the screen the two young anglers were on their way to becoming the states First High School Showcase Champions. 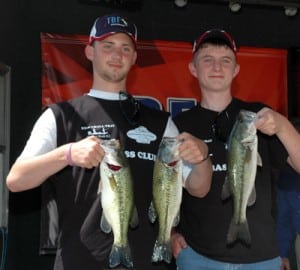 First prize included  trophies and a $250 check for their school club compliments of the TVA who served as the event sponsor and they also received a variety of prizes from the National Guard and the TBF as did the other outstanding young student anglers from Maryville and Farragut High School.

This event was the first step in highlighting High School Competitive Fishing in the State and based on the success and professionalism of these fine young men it will most certainly be the stepping stone for bigger and better events in the future.

If you are interested in starting a school club and fishing in this year’s High School World Championship Finals in Arkansas please visit our web site at Highschoolfishing.org for more details.