June 22, 2010 – There’s a lot on the line for the high school anglers in the first ever High School Fishing World Finals next month in Russellville, Arkansas on Lake Dardanelle. With collegiate bass fishing being one of the fastest growing sports in the nation, the High School Fishing World Finals will be the premier event for recruiting some of the best student anglers in the nation. Colleges are taking notice.

There will be numerous sponsored awards, prizes and trophies given during the event to top competing teams and to their home high schools. But the winning team will definitely have something to be proud of and to brag to all their friends back home about. 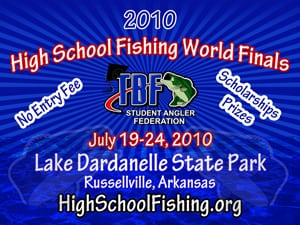 The Bass Federation’s Student Angler Federation is excited to announce that the winning 2-person team of the 2010 SAF High School Fishing World Finals will be offered a spot on the Collegiate Bass Fishing Team with the Bethel University Wildcats in McKenzie, Tennessee. Not only will they have the opportunity to fish competitively at the college level, but each team member will also be offered $4,000 per year in scholarships, renewable for 4 years. That’s $16,000 per angler, making the total scholarship amount for the winning team $32,000!

Located in McKenzie, Tennessee, Bethel University is the first college in the nation to offer bass fishing as a collegiate sport. Their bass fishing team competed in the 2010 BoatUS Collegiate Bass Fishing Championship just this past May and are competing this week in the BoatUS Collegiate Bass Fishing Open event in Paris, TN on Kentucky Lake. The Wildcats Bass Fishing Coach is Garry Mason, a seasoned veteran of the sport from Buchanan, TN. He has been a fishing and hunting guide in the Kentucky Lake area for the past 25 years.

Bethel College is a member of the NAIA (National Association of Intercollegiate Athletics) and competes in the TranSouth Athletics Conference and Mid-South Athletic Conference. It is located about 130 miles Northwest of Nashville, TN near Paris, TN.

Look for an official press release with further details within the next week.