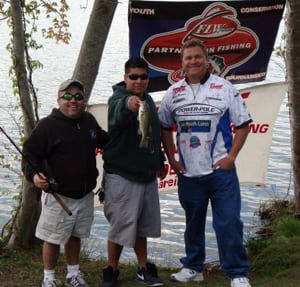 (4/18/10) The 2nd annual Stephen Decatur High School Fishing Championship was held at the Ocean Pines South Gate pond on April 18 and as luck would have it the weather was cool but bearable. Participating in the event were 17 of the 31 school club members, 9 of which were boys and 8 were girls.  The day started with club organizer Todd Martinek and FLW Pro Fabian Rodriguez helping rig up the rods and giving the young anglers advice as well as choice of lures for them to use like the worms that Berkley Lures donated through the Student Angler Program as well as frogs, crankbaits and spinnerbaits from Scumfrog, Lucky Craft and Big Mouth Lures brought by Rodriguez. It was not long before student Brandon Soloman brought in the first fish and it was measured and released back into the pond.

While the pond was only about 8 to 10 acres it was open so that the students could walk around and fish from the bank, so it was the volunteers job to walk around with a couple of golden rulers to measure and release each fish as it was caught after taking a few pictures for their records. Anglers who also caught fish were Andy Ruiz, Cody Smith and Tyler Steirhof who won the event. Amara Canfield battled with what looked to be the tournament winning fish at about 4 ½ to 5 lbs but luck would not be on her side as the fish headed into some reeds and was able to escape, better luck next time Amara. Anglers who also participated were Kyle Rodriguez, Alexis Martinek, Annie Brown, Katelyn Knowles, Madi Metrecic, Lauren Nornes, Cedric Land, Cierra, Merrit, Kelly Sullivan, Chris Markowitz, Colby Macomber and Hannah Getchell. As the event wrapped up the students then competed in a Reel Kids casting competition where there was individual competitions for fun as well. As you can see from the rest of the pictures a good time was had thanks to the volunteers, the Stephen Decatur High School and of course the sponsors like Ranger Boats, Mare Inc., st. Croix Rods, Yamaha, Big Mouth lures, XS Energy Drinks, Berkley Power Baits, Scumfrog, Lucky Craft, Berkley Fishing Lines and a special Thanks to Gander Mountain who donated 26 cases with hats where Rodriguez also put more lures for the student anglers.

Good Luck Tyler at the Delaware Federation Jr. State Qualifier on May 29th!! 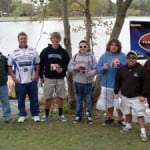 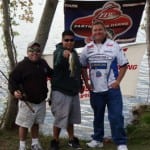 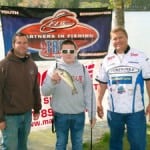 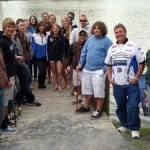 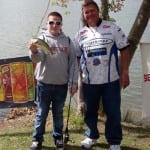 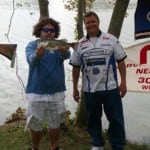 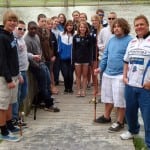 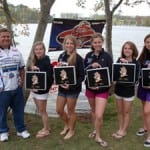 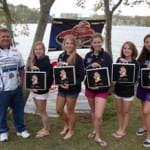