McNutt and Raper Take the Championship Titles on Neely Henry 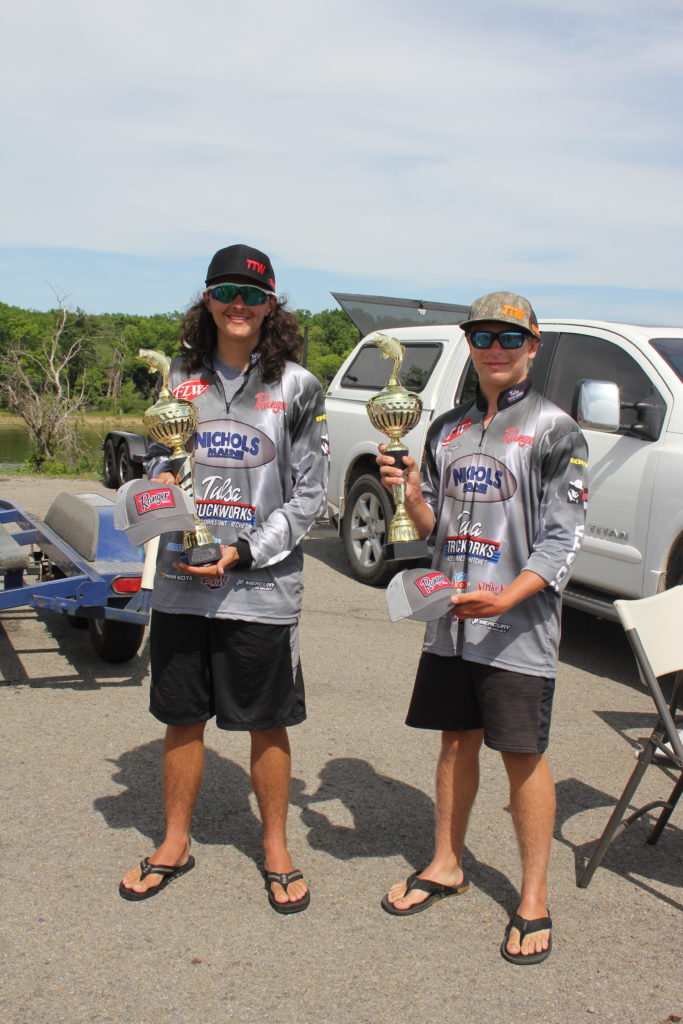 Mack Taylor and Reese David of the Sand Spring Sandites keyed in on a pattern of fish holding in deeper water just of rocky shorelines.  They had success on a variety of lures and presentations during practice but decided go with a finesse presentation.  Despite pressure on Gibson over Memorial Day weekend, the pattern and presentation held out as the pair landed a limit of bass weighing 19.42 pounds.

“There are a lot of very good high school fishing teams in Oklahoma, so we knew that winning the SAF High School Championship was going to be a challenge,” Taylor said.  “We used  a combination of a 1/8 oz shaky head with a 4 inch Bama Magic Yum Dinger and a 5/16 Biffle hard head with a Sooner Run Biffle Bug.  On the final day of practice, we let our key areas rest and looked for other off shore humps that may be holding fish.” 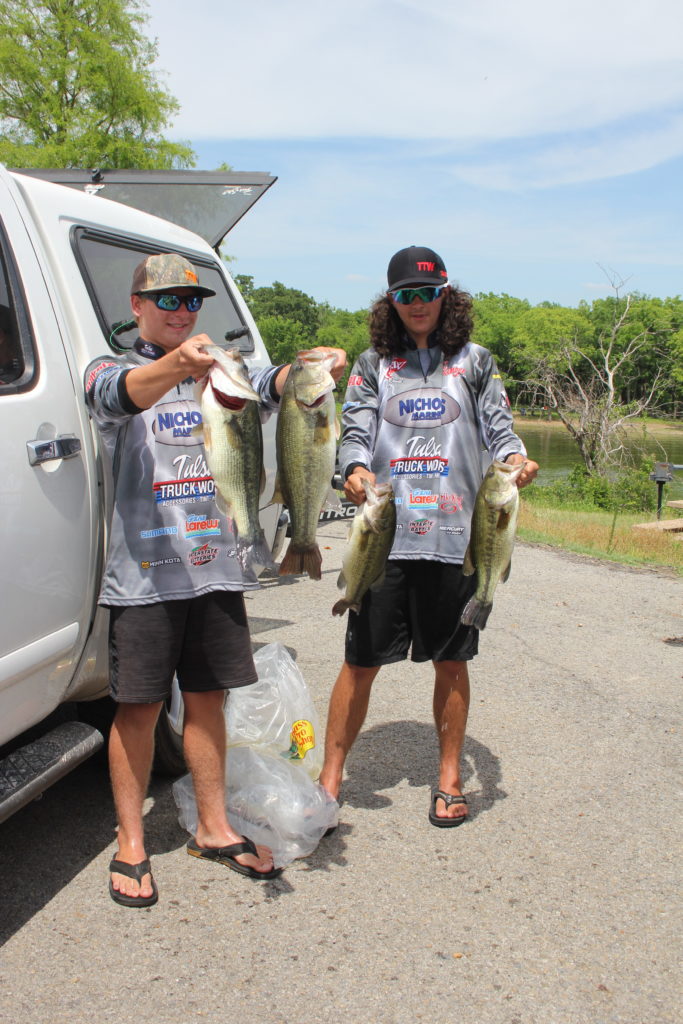 On the morning of the event the champs pulled into their first spot and ten minutes later they were reeling in a five pounder.  “We followed that with a 4.5 pound fish and then three other fish in the 3 pound range,” Reese commented.  “We had a 19 pound bag by 8am.”

After that, the biggest challenge for the team was making sure the fish stayed alive and healthy through the Oklahoma heat.    “We used a combination of G-Juice, Ice, and the oxygenator system on our Ranger boat to keep the fish healthy,” Boat Captain, Jeff Taylor, said.

“We would like to thank the SAF for hosting the High School State Championship,” Taylor and Reese, continued.  “We love bass fishing and these events give us a chance to learn more about competitive fishing and to also meet a lot of other high school anglers from across the state who share our love and passion for the sport.

We would like to thank our sponsors for helping us throughout the year, Nichols Marine and Stan Jones for keeping our boat in top condition and supplying us with oil and Tulsa Truck Works for helping us keep organized with a Leer camper.  We also appreciate the support from Quantum, Strike King, Interstate Batteries, Gene Larew, and Yum.  Most of all we would like to thank our parents who are our biggest supporters.”

Coming close in second place and punching their ticket to the national contest, was the Wagoner Bulldog fishing team of Tate Brumnett and Austin Hornbuckle.  Brumnett and Hornbuckle had a limit of bass weighing 18 pounds 44 ounces with a 4.48 pound kicker.

The third place team of Kole Poindexter and Larry Rea Jr from the Eufaula Ironheads had a limit of bass weighing 17.84 pounds.  Fourth and fifth places went to the teams of Cameron Dahlem and Kolby Frazier from the Sallisaw Black Diamonds with 17.81 pounds and Jeremy Tolle and Garrett Hale of the Kiefer Trojans with 17.39 pounds.  The final qualifying spot went to the sixth place team of Caden Sharp and Gage Hill of the Grove Fishing Team with 16.81 pounds.

The High School Fishing World Finals and National Championship are just around the corner as State Championships and Open events wrap up across the country.  On Fort Gibson Lake, six more top-notch teams are added to that list and will face off against the best of the best on Pickwick Lake. 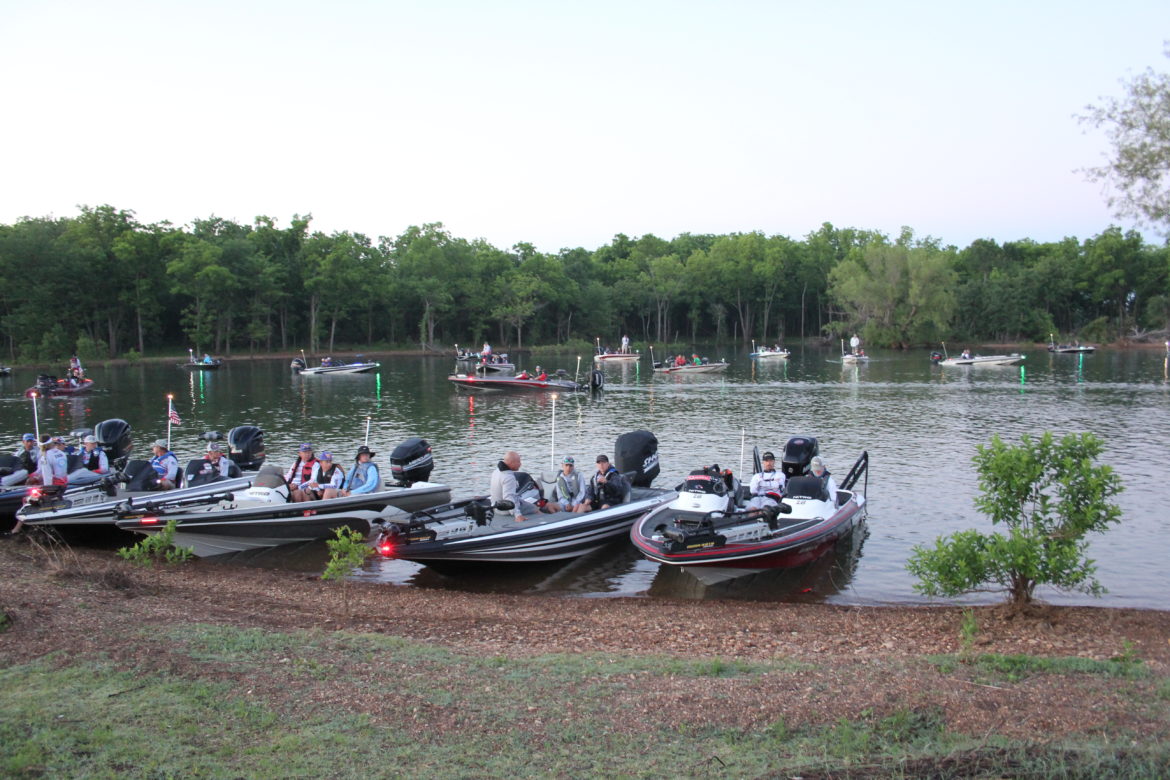