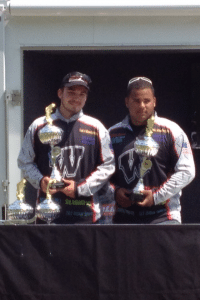 For Henry Shoemaker and Phillip Browning it was a battle of attrition as they battled the rain drenched waters of the Ohio river to win the 2013 West Virginia High School State Bass Fishing Championship in Gallipolis, Ohio.

“The tough conditions forced us to fish a little differently then we had planned,” stated Shoemaker. “We caught our only keeper flipping a Zoom Craw on some riprap above the dam. We knew every fish would count but I never dreamed that one fish would win the event,” added the pair from Westside High School.

That one fish weighed in at 1 lb 6 oz but it was enough to advance the pair on to the Central Conference Regional Championship on Kentucky Lake in October.