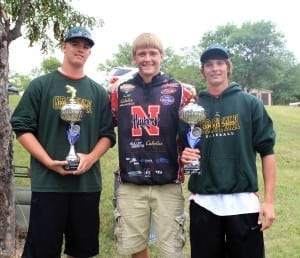 Soe and Ahrens advance to the regional tournament Oct. 5 at Lake Texoma, Texas. The regional champion advances to nationals next spring.

Fourteen of the 21 competing teams brought 35 largemouth bass to the weigh-in station.

The state tournament is a cooperative program between the Nebraska Game and Parks Commission and The Bass Federation – Student Angler Federation (TBF-SAF). The High School Fishing program includes a state tournament for every state in the continental United States, as well as Ontario, Canada. Two-person teams from grades 9 through 12 compete and are paired with a coach who provides a boat for competition.