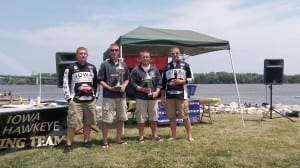 Tournament day began with much anticipation for the day of fishing that lie ahead. The nine teams from across the state of Iowa arrived at the Port of Burlington ramp located on the Mississippi River Pool 19 at 5:00am for registration. Overcast skies set the scene for the take-off as the bass boats roared down the river. The anglers had a couple hours of good weather before a strong rainstorm took over the area. The heavy rain accompanied with strong winds made for difficult fishing conditions. The rain eventually let up around 11:00am. 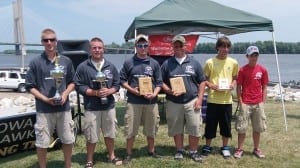 Despite the tough fishing conditions, several teams were able to locate and get some quality Mississippi River largemouth in the boat. The third place finishers, from Eastern Iowa High School Bass Club, Hunter Reifschneider and Colton Wolfe, sacked four keepers totaling 8 pounds 6 ounces.  Local knowledge of the fishery proved to be advantageous given the weather conditions.

Finishing in second place, the Burlington High School team of Tyler Giese and Jake Kroll came up just 8 ounces short of winning the event by bringing in a sack weighing 13 pound even. Giese and Kroll said they caught their fish on shallow wood in the backwaters throwing chartreuse spinnerbaits. 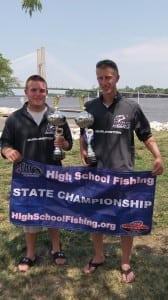 It was a close margin of victory, but the Burlington High School team of Max Mercer and Jobe Ashby were able to amass 13 pounds 8 ounces to overcome the hefty sack brought in by Giese and Kroll. Early in the morning, Mercer and Ashby said they located schooling fish feeding on shad on the main river. During the rest of their day they said they moved from spot to spot, slowly culling up. A white tube and chartreuse square-billed crankbait were the top producers for the two, with Ashby catching the big bass of the tournament at 4 pounds 8 ounces on chartreuse black-back KVD 1.5 square bill. After the weigh in Mercer and Ashby said they had found their fish on the main river during practice of the week prior. Mercer said, “We knew we had found the right fish in practice to win the tournament, it was just a matter of executing today.” Ashby added, “Early this morning we did lose a 4-5 pounder that hung up on a log, but lucky for us we still had enough weight to win.” The winning team said they have yet to fish or even lay eyes on Lake Carlyle, but are extremely excited for the opportunity to fish in the regional event. 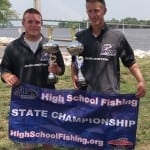 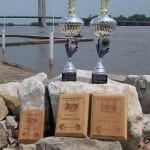 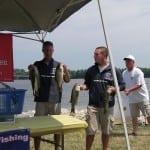 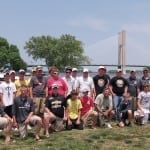 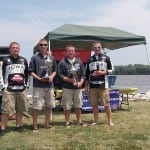 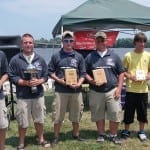