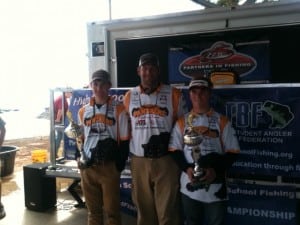 Carter McNeil and Tucker Smith brought in 16 LB 3 OZ bag of fish to win the event, despite thirty mile per-hour winds on the big lake.

“The wind was really a factor today for us today. We weren’t sure if we had enough weight to win but we knew we had a pretty good bag for these conditions,” stated the pair of excited sophomores. ”We used spinner baits primarily all day targeting small pockets where the wind was blowing into them. We could not have done it without our boat captain and want to thank him for helping and encouraging us in the windy conditions all day.”

McNeil and Smith’s 16 pounds 3 ounces was enough to outdistance Andy Drennon and Blake Jones of TL Hanna High School who also brought in a very respectable 15 pound sack to lock up second place.

Finishing in the third position was Zack and Logan Watkins from Palmetto High School whose 5 fish limit of 10 lbs 6 oz, they squeaked past the 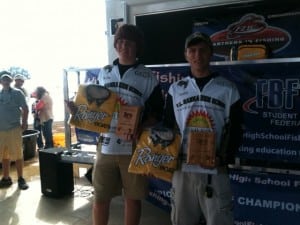 Ben Stone and Christopher Bensel of Dixie High School only had two fish on the day but one of them was a 4 lb. 9 oz. beauty that proved to be the big bass of the day at the Portman Marina weigh-in in the beautiful host city of Anderson South Carolina.

The High School Fishing season continues its trek of state championships across the country. Visit highschoolfishing.org for an event coming near you.