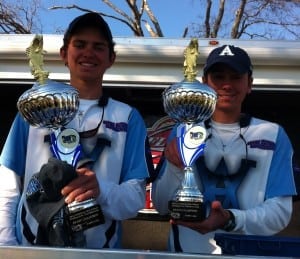 Take-off was delayed as intense showers and lightning storms hit the area Sunday morning on Caddo Lake. Nearly an hour passed before cloud-to-ground lightning strikes were verified clear by the National Weather Service and boats were released.  As boats filed through check-in one by one the rain continued to beat down; it was clear competitors were in for a hard fought win.

Cameron Mattison & Chad Poulsen of Airline High School weighed in an impressive 20lbs 13ounces to take the titles through wind and rain. “During the rain was when we actually caught the most fish,” Mattison said. “It was actually when the rain let up that we stopped catching them.  But, we had already netted a decent sized bag at that point.”

Mattison and Poulsen fished last year’s state championship with a seventh place finish.  This year, with determination and lots of practice they solidified their win with a comfortable four pound margin.  “It feels really good to finally win one!” Poulsen said.

Mattison and Poulsen will advance to the 2013 TBF/FLW Southern Conference Championship October 19 on Lake Texoma in Pottsboro, Texas.  A win there will send them to nationals to compete for a $10,000 scholarship!

Coming up in second was Dylan Poche & Brenton Lester with a 16lbs 11ounce bag. They also took the big bass prize with a nice lunker at 6lbs 6ounces. Third place finishers were Hunter Venable & Jude Boudreaux, longtime SAF competitors who fought fiercely in the competition.  They narrowly missed second with 15lbs 5ounces.

An impressive crowd weathered the elements for our largest showing at the Louisiana High School Fishing State Championship to date with 43 boats!

SAF encourages all students to notify their high schools of this new and exciting opportunity.  We hope to see even more students at the next championship!