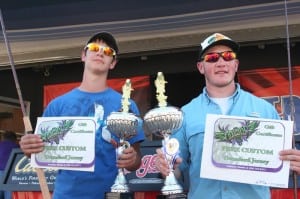 It was an exciting day at Lake LBJ just outside of Marble Falls Texas Saturday morning as 66 boats would line up  to start the 2013 Texas High School State Championship! As the take-off numbers were called and the boats left one by one every student there was focused on claiming the top prize in this, the largest field of competitors ever assembled for the Texas High School State Championship!

Claiming both the overall title by a slim 2 ounces, as well as the big bass prize would be Colton Mitchell and Dallin Bishop. While they would come short of the 5 fish limit, their 3 fish sack was anchored by a monster big bass of 7 lbs. 11 oz. it was enough to push them to the top!  Their 3 fish tipped the scales at 15 lbs. and 13 oz. 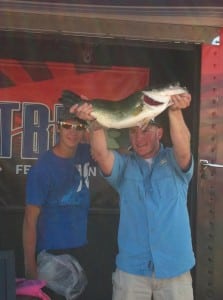 Mitchell actually spotted the monster bass on a bed earlier that day, but initially the fish showed no interest and “spooked  off.”  The team would return an hour later to take another shot at the behemoth. Mitchell was throwing a jig but it was Dallin who would coax the fish to bite on a worm.

“Lucky for us it swam out into open water rather than under a nearby dock.” The pair relayed in the story about the big fish. “It was pulling drag, then it jumped a couple times but we got it in the net.”

“It was a rough day fighting the waves, the wind and getting sunburned but it definitely paid off.  A thousand dollar scholarship, lot’s of awesomeness, and a memory that will last us a lifetime. We can’t wait to see what is next!” commented the Rouse High School Raiders team.

Mitchell and Bishop will take home $1,000 in scholarships EACH generously contributed by Subway, Paul and Connie Brady and Marble Falls Electric & A/C. They will also appear on the cover of Texas Fish & Game Magazine later this year.

Their scholarship winnings may not yet be finished. The pair will now advance to Lake Texoma on October 19 for the 2013 FLW/TBF Southern Conference Championship along with a travel stipend. A win at conference will send them on their way to nationals in 2014 to compete for $10,000 in scholarships. Of course the Texas anglers and all SAF members nationwide are eligible to register for and compete in the 2013 High School Fishing World Finals to be held July 15-20, 2013 in Russellville, Arkansas. That event paid out over $40,000 in college scholarships and prizes last year! 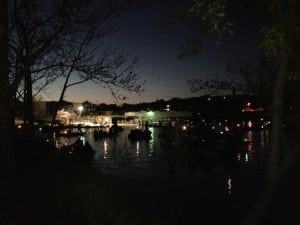 Coming in second at the Texas State Championship with a heart-wrenching tie-breaker for this spot was Knox Kronenberg and Richie Pusateri from West Lake Fishing Club. Initially, they would tie with Wyatt Frankens and Clay Nash of Corrigan Camden High School as both teams weighed in 15 lbs. 11 oz.  As the rules were for breaking a tie was read aloud to the crowd you could cut the tension with a knife until it was made clear that Kronenberg and Pusateri would claim the runner up spot and the $500 apiece in scholarships, generously donated by Cattleman’s Bank, Galloway Insurance, Marble Falls Spa & Pools, VFW Post 10376 and Bryan and Lorna Ellis.

Frankens and Nash, who lost the tie breaker and finished in third place are veteran high school competitors with SAF, taking several tournament wins in the past including last year’s Texas State Championship.  No doubt, we will see these two hoisting the winner’s trophies again someday.

Texas high school fishing and The Texas High School State Championship held at Lake Lyndon B Johnson this year has grown by leaps and bounds and more than doubled from last year thanks to the site host of Marble Falls, TX and under the umbrella of the Student Anglers Federation. No other program offers more scholarship money, educational incentive for young competitors, grassroots expertise and overall commitment to our nation’s youth. Backed by the horsepower of The Bass Federation and FLW Outdoors, the Student Anglers Federation is the oldest and largest national high school fishing program in North America with High School State Championships scheduled for 46 US states as well as Canada.