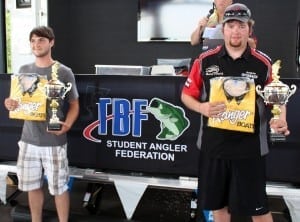 Andrew Y’Barbo and Caleb Ramsey from East Texas High School had been on the phone for two days trying to locate a boat captain for the Inaugural Sam Rayburn Open in Historic San Augustine, Texas.  An hour before registration started Friday night at Jackson Hill Marina, the pair found a local lady angler who agreed to take the pair out for the day.

That combination of a timely call, a little good luck and of course a little angler skill landed the pair on a day to remember as they brought in a five bass limit at 10:30 am that had a net weight of 22 lbs 6 oz to win the Inaugural event that was hosted by the San Augustine Chamber of Commerce and Jackson Hill Marina. The pair not only conquered Sam Rayburn Reservoir, but also the other 86 teams who registered for the event that launched out of beautiful Cassel Boykin County Park.

“This was probably the greatest day of fishing I have ever had,” stated Andrew. “We fished off a deep ledge that dropped from 18’ down to around 30’. It was just an awesome morning of fishing!”

The winning weight helped the pair earn a scholarship to Stephen F. Austin University along with a big trophy, several sponsor prizes and East Texas Bragging rights for the next year. 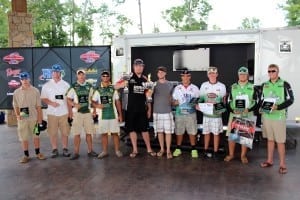 Finishing second was Ryan Satterfield and Jordan Lemley from Genoa Central High School who also had a very respectable five fish sack that weighed in at 16 lbs 11 oz. That limit outdistanced Bo McGraw and Dillon Harrell of Houston who boated 14 lbs 14 oz to finish third.

All the anglers in this event were treated to an angler celebration on Friday evening that was hosted by the San Augustine Chamber of Commerce. The group was invited to a downtown angler block party where several pro anglers and vendors met with the teams and their families. The response from the community and the anglers was terrific and this event promises to grow in the future.

The SAF State Championship series continues this week with State Championships in New York, Vermont, Connecticut, Massachusetts, Rhode Island and Mississippi. For registration information on all of these events go to Highschoolfishing.org for more details.