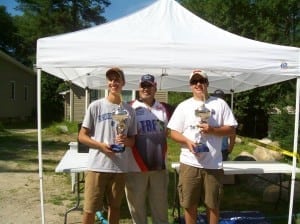 The Connecticut State Champions were Corey Horelick/Austin Bestwick of Ella T Grasso Tech; they had a limit that weighed 7.45lbs. Second place was Ryan Kusmit/Jake Budris – Sound School with 6.28 lbs.

All 3 state champion teams will advance to a conference championship in the fall. 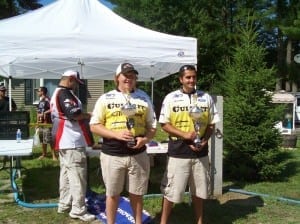 Students and parents can go to HighSchoolFishing.org for details on the Student Angler Federation (SAF) and to sign up. Cost is only $25/ year and includes full TBF and FLW benefits, including FLW Magazine e-Edition and insurance coverage for students and their club. The state champions from each state will advance to an FLW/TBF High School Fishing Conference Championship. Conference winners will advance to the FLW/TBF High School Fishing National Championship held in conjunction with the FLW College Fishing National Championship in the spring of 2014. All SAF members nationwide and all state championship participants automatically qualify for the largest event in high school fishing, the 2013 High School Fishing World Finals.  At these events students will compete for thousands in college scholarships and prizes. Each team qualifying for a conference and/or national championship will receive a travel allowance to help offset expenses. The National Champions will also receive a $5,000 scholarship each to use at the university of their choice.