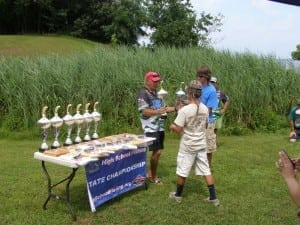 Mifflinburg High School brought several teams to the state championship and the team of Dylan Pawling and Shawn Diffenderfer were victorious for Pennsylvania. They weighed in a limit that weighed 16.43 lbs and a nice 4.62 kicker to be crowned state champs. Second place for PA was another Mifflinburg Wildcat team of Zach Himmelreich and Ryan Dehaas with 13.42 lbs. Third place was Skyler Krause and Joshua Bucher – Cedar Crest Falcons with 4 fish that weighed 13.08 lbs with a 5.68 kicker!

The New Jersey State Champions were the team of Next Generation Bassmasters Jake Smith and Richard Pennacchio. They had 13.81 lbs. Second place went to Kyle Harnack and Matthew Christopulos of the Riggin & Jiggin club with 9.83 lbs.