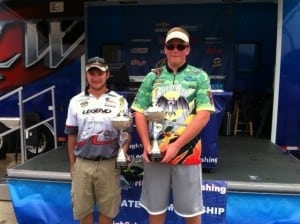 Greg Zellers and Brody McWilliams pulled of a rare double in High School Fishing by winning the Indiana High School State Championship for the second consecutive year with a five fish limit that weighed in at 10 lb 13 oz.

The pair of talented anglers outdistanced Blake Albertson and Dayton Land of Bloomington High School who had 4 fish that weighed in a very respectable 8lbs 13 oz.  Finishing third was the brother combination of Tyler and Bret Olson of Charlestown High School who brought three fish weighing 8 lbs 3 oz to the FLW Outdoors BFL Trailer weigh-in.

“We caught most of our fish today using jigs and trick worms,” commented Greg Zellers. We caught fish throughout the day and even though we never did cull one of our keepers we caught 10 or 12 nice fish today,” added the soon to be senior from Winamac High School. “I used a green pumpkin jig pretty much all day,” stated McWilliams who recently graduated from Decatur Central High School and will be joining the Collegiate team from Indiana University next fall. “The key to our success today was finding weed lines and concentrating on those areas,” added McWilliams. 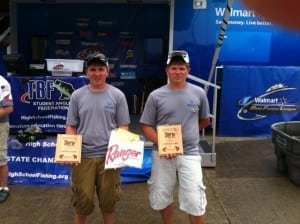 Zellers and McWilliams will be representing the State of Indiana this fall at the TBF/FLW High School Central Conference Championship on legendry Kentucky Lake in October where they hope to advance to the High School National Championship.

The TBF High School Championship series continues next week with the Ohio/West Virginia State Championship in Gallipolis Ohio on the shores of the Ohio River.