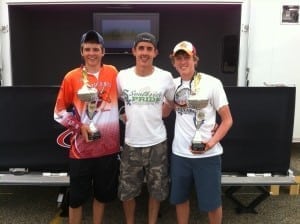 It was a tough day of fishing and they were the last team to come to the scales with a berth in the Central Conference Regional Championship at Kentucky Lake waiting in the balance. Joseph Hays and Jimmy Ciurej placed their fish on the scale, they knew it would be close. Dailus Richardson and Trevor McKinney of Benton High School had previously weighed in 3 fish and were the leaders at that point.  Even though the field wasn’t huge the tension was high as the scales read out 6LBS 8 OZ to put the top two teams in the Illinois SAF State Championship in a virtual tie for first place.

After a short break to tabulate all the teams and initiate the tie breakers Hays and Ciurej were declared the winners on the bases of having the most fish alive at the end on the end of the contest and they claimed the champion’s trophy and the opportunity to advance on to the TBF/FLW regional contest.

As for Richardson and Mckinney they took the narrow defeat in stride. “Hey I guess that’s part of fishing,” stated Richardson. “The fish that didn’t survive was hooked right in the top of the mouth and was in the same livewell as our other two fish that were lively as ever. She might have been stressed from spawning or something else may have been wrong with her.”

Rounding out the field with a third place finish was the team of Justin Schick and Michael Kleen of Morton/Metamora High School who had a nice pair of Clinton Lake Bass the weighed in at 4LBS and 11OZ.

As for the Champions they got a boost in the competition by having a former teammate and two time IHSA state qualifier Luke Opoka as their boat captain for the day. Opoka, now a collegiate angler, wanted to give back to the team he helped start by providing captain services for the smiling pair.

“We worked hard all day,” stated Hays. “We caught a lot of fish today, but we struggled to catch any that would keep. I lost a fish right at the boat in the last 10 minutes of fishing and I thought sure that was going to come back to haunt us,” added Ciurej.

The popular Clinton Lake Marina was home to the event and volunteer services were provided by the Illinois Bass Federation who served as hosts for the annual event.

The TBF/FLW High School Championship series continues this week with events in Alabama and a host of other states coming up in the near future. Check out Highschoolfishing.og for more details and opportunities to fish the High School World Finals and the Sam Rayburn open.