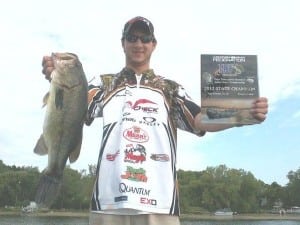 Kyler Chelminiak’s fishing skills have landed him a scholarship to Bethel University in Tennessee and fish for the school’s fishing team.

The Whitnall High School senior, who lives in Franklin with his mother Mary, father Kevin and brother Shayne — and the family’s four dogs (three deceased) — have made the outdoors a pivotal part of their lives.

So it should come as no surprise that Kyler recently earned a $48,000 scholarship to Bethel University in Tennesee, half for academics and the other half for him to compete on the school’sBassCats fishing team.

Greenfield Patch caught up with Whitnall senior for this special edition of Names in the News.

Greenfield Patch: When did you first get into fishing and who got you started?

KC: I began fishing at a very young age, I would say about 2 years old. My father and grandparents had me starting out at local ponds like Scout Lake, and then only a year or two later my dad and uncle began to bring me out on their boats. Ever since then, I’ve been hooked.

Patch: I understand you’ve won state, regional and national championships … give me some of the “career” highlights.

KC: If I could write about all of my highlights in fishing, I could probably write a novel! Every day we go out, I am constantly amazed at how much more your passion can strengthen and how much more you can learn about the sport. …

I was immediately attached and addicted to fishing ever since I stepped on a boat, and through the years, I always thought and dreamt of the day I could compete with the guys I saw on TV growing up. But it all became reality when one stormy day changed my life. It was the first state championship that I ever competed in, and it was also some of the worst weather I’ve ever competed in. I was 14 years old at the time, but I was competing in the 15-18 age group division (due to birthday rulings) but even that age difference didn’t intimidate me; I believed I had a gift. And as fate would have it, I ended up winning that 2009 WBF Junior State Championship on Swan Lake, and my life has been different ever since. After the tournament, I felt so grateful and honored to be crowned as “The Best in WI” and was extremely excited to be qualified for the next year’s National Guard Junior World Championship.

My brother and my dad told me that I could get sponsors from winning the State Tournament, but I thought they were just joking. Next thing I know, I started receiving sponsorships from Oakley Sunglasses, Uncle Josh Bait Co., Iron Clads, Manns Bait Co., and Brovarney Baits. I was so excited and thankful with all of the support that I was getting from companies all across the country that I began to seriously consider maybe following through with a career in fishing. … And I have also been able to pick up more sponsors of Denali Rods, Paycheck Baits, Quantum Rods and Reels, JJ’s Magic, and Boat Bling.

Even though I am almost done with my Junior tournaments, I have been so blessed this far in my career that I hope in my future I will be just as triumphant.

Patch: What is it about fishing that you love?

KC: Fishing is an ever-changing sport, and I think that is what I love most about it. You can never be a “master” because from day to day conditions change. Fish have personalities, which makes them interesting but yet down-right frustrating at the same time. Our job as anglers is to study the daily patterns of fish, and how they react to their surroundings. Morning, day, night, sun, clouds, hot, cold, rain, snow, wind, water temperature, time of year, time of month, moon cycle, forage cycle, fish spawn, crawdad spawn, shallow, deep, mid-range, cold front, high pressure, thermocline, where they stage throughout the year, why the stage there throughout the year, where their food is, why their food is there, what makes who go where, and the list never ends.

There are so many aspects of fishing that even the most experienced anglers are not even aware of that make this sport so addicting and so rewarding that you never want to quit or give up. Just knowing that you did something right to get a fish to bite is an accomplishment in itself, and knowing that makes you feel like every bit of a million bucks. I still get excited from any and every bite that I get, regardless of the size of the fish, and when I don’t get bit it only makes me want it more. And of course, you can never deny the peace and serenity of being outdoors and on the water anytime that you are out on the lake; that is the part that makes everything whole for me.

Patch: How did you land the $48,000 scholarship to Bethel University, and what is it about Bethel/Tennessee that made you want to continue schooling/fishing there?

KC: Bethel University interested me right from the beginning. When they offered scholarships for fishing, I knew that I wanted to pursue that dream. Then from research I learned a lot about their program and fishing team. They have been very successful in many different events, and I figured that it would be the best opportunity for me if I wanted to seriously persist on a path to a career in fishing, and maybe even towards a professional career. I especially like how they take kids and help them towards the next step to becoming a competitive angler, which is exactly what I want

Their academics aren’t bad either! Haha, but in all seriousness I have been told all my life that it’s great that I want to pursue a future in this sport, but it is extremely important to have an strong education just in case plans fall through, which I agree with 110 percent. I wouldn’t be considering this college if I wasn’t impressed with their degree to job-after-college ratio.