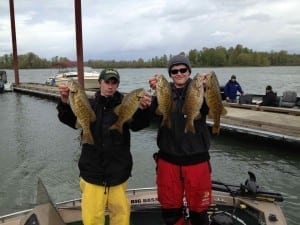 The TBF Oregon held the High School championships out of Willamette Park on the Willamette River in Portland Oregon. The winners of the event were Jacob Wall and Cecil Williams-Wright with a 5 fish limit weighing 13.83# Second place was the team of Nick Chin and Daniel Kalmikov with a 5 fish limit of 12.31 pounds. Both teams were fishing tubes and crankbaits catching these limits of Smallmouth bass in the river. Congratulations to both teams.