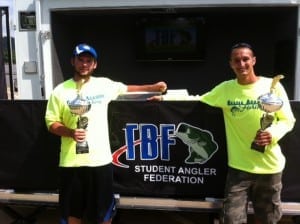 Winston Wade and Zack Blanton have been fishing together as long as they can remember. Saturday, in what proved to be some of the toughest conditions possible, they added one more day to remember as they won the Ohio SAF High School State Bass Fishing Championship for the second time with an impressive 5 five limit that weighed in at 9lbs 6oz.

What was impressive about the catch is that it came on a day when everyone else struggled to catch a single fish as the mighty Ohio River reared its head after three days of heavy rains and storms. 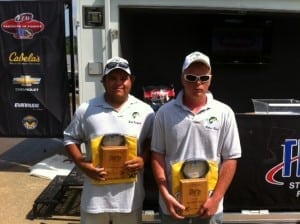 “Finding a little green water and staying out of the current was the key to catching a limit,” stated Wade who is heading into his senior year at Gallia Academy High School.

“We used a combination of spinner baits and tube jigs to catch all of our fish,” added Blanton who recently graduated from Gallia Academy. “We are thrilled to be moving on to Kentucky Lake and another chance at the regional championship,” cited the smiling pair.

An equally impressive effort was turned in by the runner-up team of Dalton Rand and Bradley Bumgardner from Fayette County who also had a limit of fish that weighed in at 7 lbs 11oz. to finish second. Rounding out the field in third place was another team from Gallia Academy consisting of Billy Powers and Sydney Rose who had two fish that weighed in at 2lbs 6 oz.

High currents and debris plagued the dual state field from Ohio and West Virginia who converged on the scenic town of Gallipolis for the third year. “Boat captains for all the teams are to be commended for their efforts in ensuring the safety of the anglers,” commented TBF Youth Director Mark Gintert. “The key to this High School Program across the country is coaches and boat captains and today they proved to be our absolute best resource in keeping our anglers safe,” added Gintert.

The SAF Championship Series continues next weekend with the Sam Rayburn Open in East Texas. This is an open event for all SAF anglers from across the country to participate in. Registration for that event will close Friday afternoon June 21st.