The North Carolina State Championship was held on Shearon Harris Lake in New Hill, NC. This lake is known for producing heavy bags of largemouth bass. However, with a cold front lingering over the state for several days, the fishing was going to be tough. The day started off with 38 teams in the cold rain. Thankfully, the winds were light but out of the east. Everyone arrived in warm clothes covered in rain suits ready for the challenge. 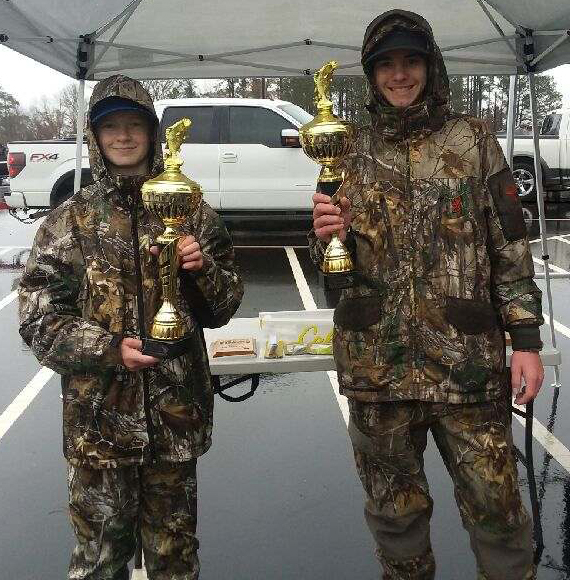 Teams gathered around in their boats for the blastoff and were ready to fish. After the rules and the national anthem, boats blasted off in 3 different flights. Hours passed and we started getting reports that no teams were catching any fish. Some teams called it a day due to the cold temperatures and rain. By the end of the tournament, only nine teams were able to successfully put fish in their live-wells. As the anglers started to check in their fish, we could tell it was obviously going to be low numbers of bass but good quality. The third place team of Trent Lawson and Aaron Shumaker weighed in 1 fish at 6.54lbs.  The second place team of Harrison McCall and Carson Palmer weighed in 2 bass at 6.65lbs and first place was won by Konner Kinlaw and Corbin Yow with 2 bass at the weight of 6.78lbs.

Konner and Corbin attend Union Pines High School in Cameron, NC and are both freshman. They were able to take first place by throwing square bill crankbaits in 3ft of water in the back of coves during the middle part of the day. Being the first time as a team, these young men along with their boat captain Derek Kinlaw did a great job and we congratulate them for winning the North Carolina SAF State Championship!