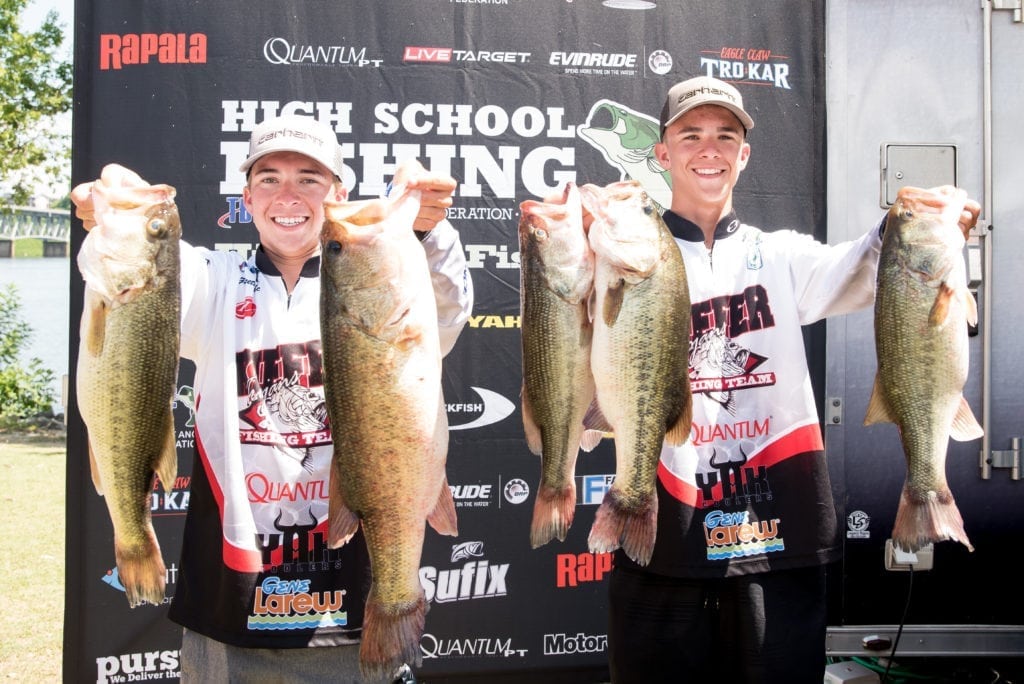 Ponca City, Okla., – July 2, 2018 – The TBF Student Angler Federation, (SAF) along with our partners in fishing at FLW hosted the 9th Annual High School Fishing World Finals June 26-30 on Pickwick Lake. The most prestigious high school event in the country lived up to the hype crushing records in attendance, number of contenders and participating states. Over $150,000 in scholarships and prizes were awarded with a field consisting of 384 teams from 35 states. This is the fourth year the HSFWF has been hosted by the Florence-Lauderdale Chamber of Commerce on Pickwick Lake in Florence, Ala. 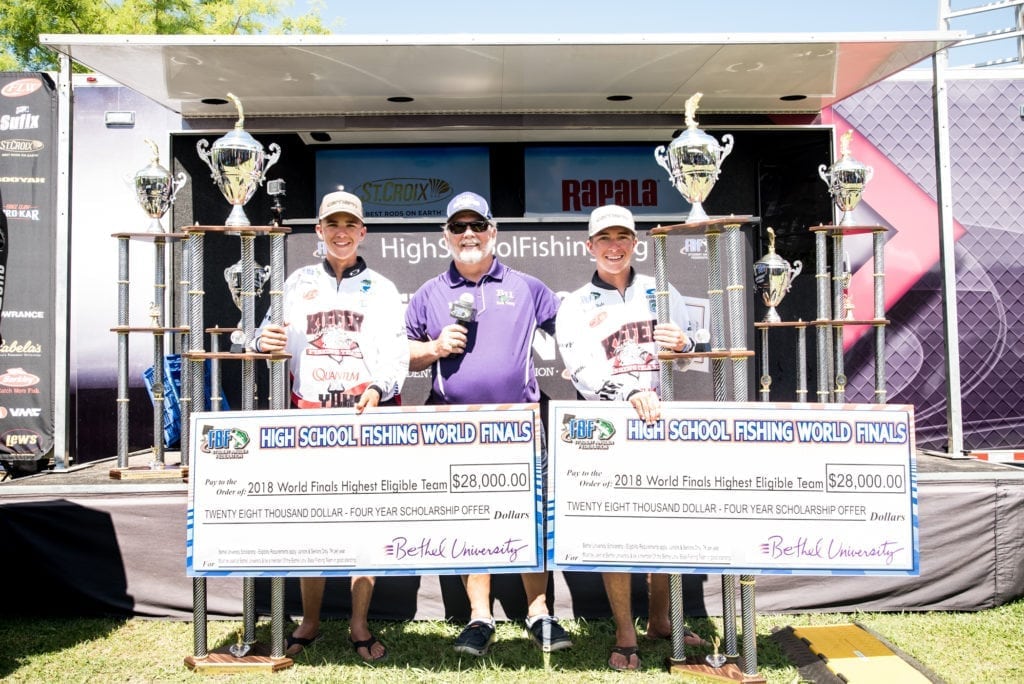 The 2018 High School Fishing World Finals Champions, Jeremy Tolle and Garrett Hale, from Kiefer Trojans High School in Oklahoma brought in a limit of bass weighing 23 pounds 9 ounces to claim the esteemed titles, scholarships, and prizes. They walked away with a $28,000 a year for four year scholarship award to the top ranked college fishing program in the country, Bethel University.

In addition to $56,000 in scholarships, the champions each received a $250 Cabela’s gift card, nearly 6ft tall World Finals trophies and 50 inch flatscreens and more. 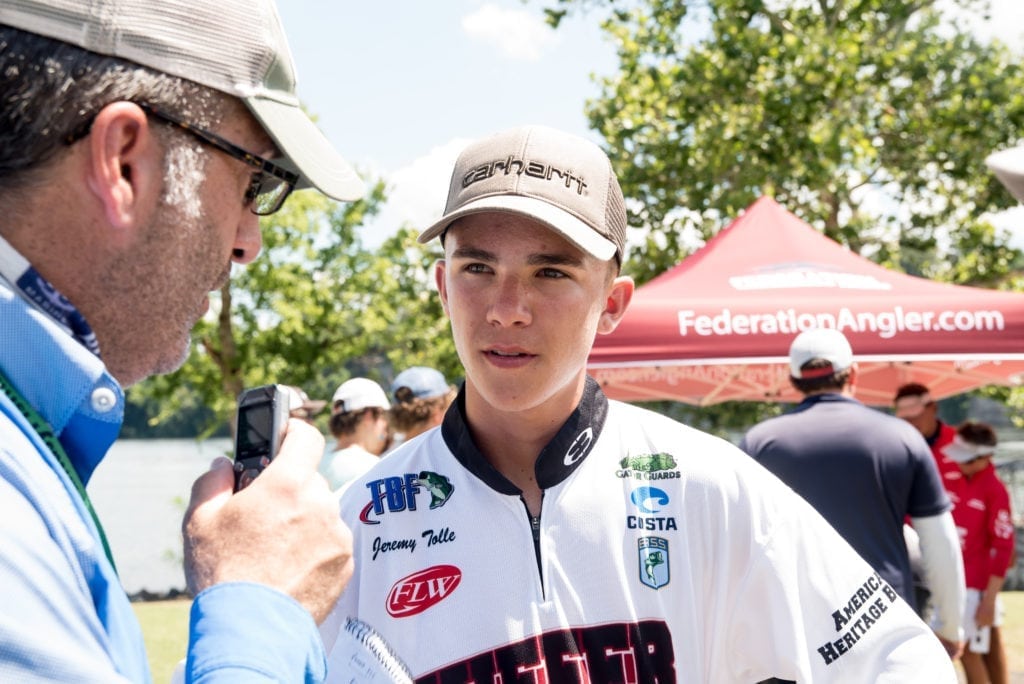 “It’s still crazy. It’s almost like it hasn’t set in yet every time I look at the trophy or anything that brings it up it just blows my mind away,” Tolle said. “My partner and I drove my dad’s truck home by ourselves, about 9 hours. He was worried the whole way home if we were awake or had enough energy. But, we kept telling him every time we got tired we would just talk about it and get all excited again.”

Tolle and Hale definitely had reasons to celebrate. They came from 55th place on day one to be named 2018 World Champions. 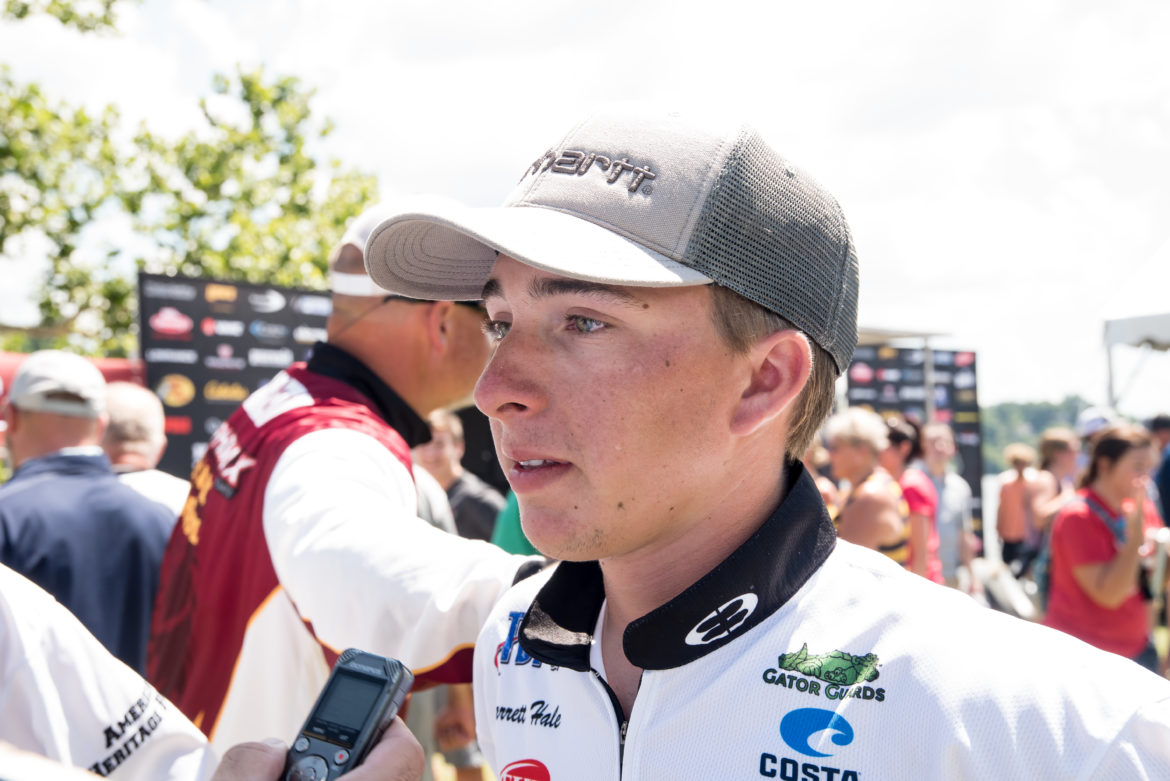 “I’m pretty estatic; I’m still on cloud 9 right now,” Hale said. “I mean it was just crazy because when it happened it sat in real fast. On the way home we just kept talking about it and redoing it over the whole week. I mean we didn’t even think we had a chance. But, on the way home the part that set in was that the decisions we made, they were the right ones.”

At the banquet with all the trophies set out on stage the shiny golden fish on top was about 10 ft taller then the team as they walked by and the team’s boat captain, Jeff Tolle, said they were going to get one of those.

“We took it serious, we really wanted to have it sure,” Hale said. “But, it was kinda like a joke at the same time – I mean there were 384 boats. Our accomplishment was making day four and just trying to get to the top 30; I guess everything went right for us.” 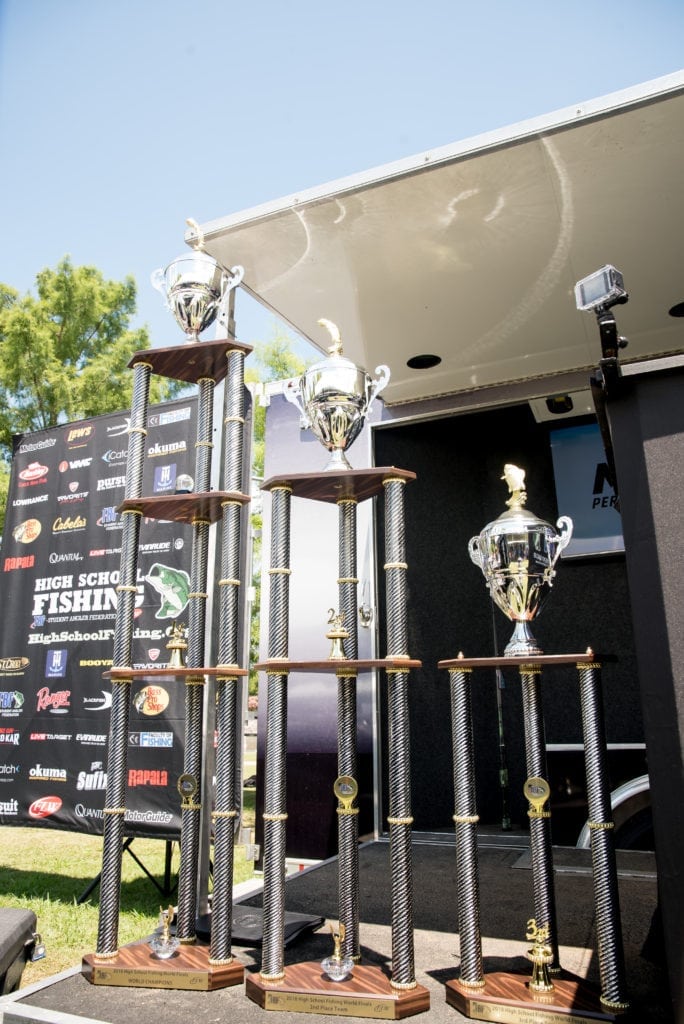 The same trophies at the brut of the joke now have homes in Tolle’s living room right next to their TV and Hale’s bedroom. Hale’s Mom re-decorated his room while he was at the event and now there’s a perfect spot for it. It’s as if Mom knew to make room for it.

“Of all the prizes that 6ft tall trophy was THE winner,” Boat Captain, Jeff Tolle, said. “I’ve been around fishing my whole adult life and I was really blown away with the tournament. I thought you guys rolled out the red carpet for those kids. It was a great experience.

The pinnacle to Jeremy is being a college angler and I think that your event really helped get them ready for what it’s going to look like,” Tolle continued.

“I thought the prizes for college were really cool, and the recognition they got, talking to them on stage, feeding them, it was all just really well done. It’s a cool format. I mean, that’s a legit, big-time, national- level (format) that’s what it’s like. Let them experience it.” 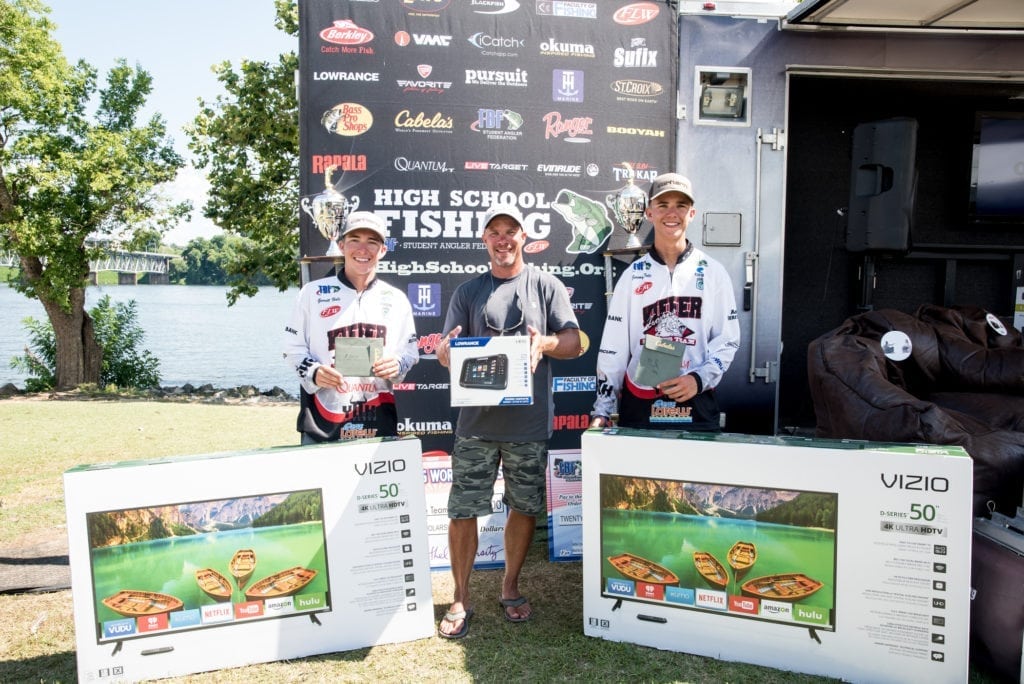 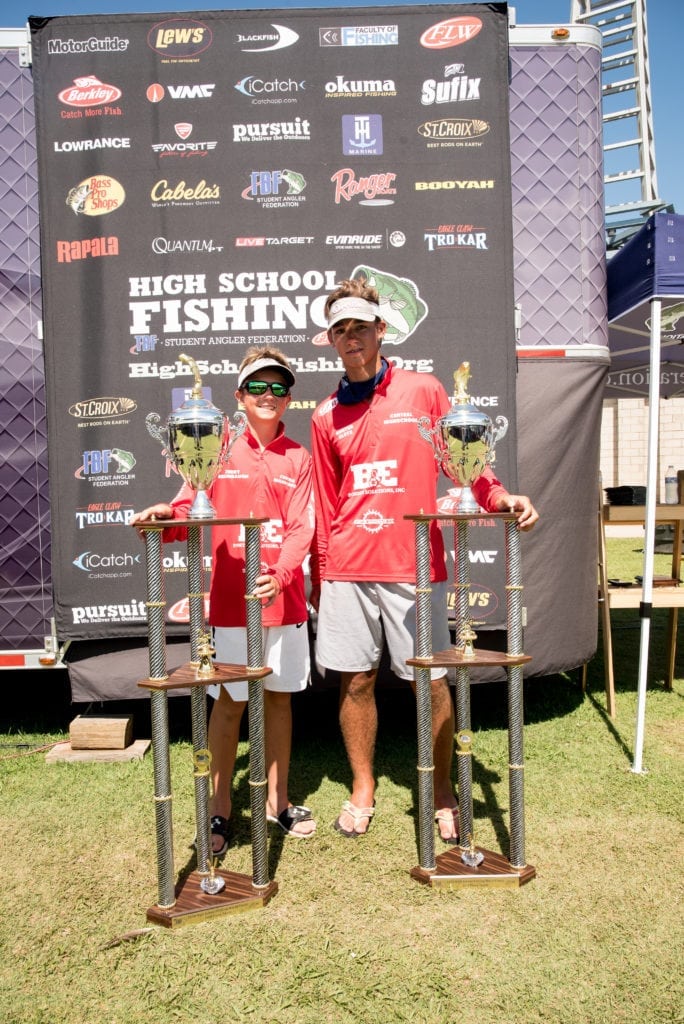 Coming in second was Gerald Brumbaugh and Hunter Klotz of the Central HS Dragons team from Martinsburg, Pa. The team had limits of 12 pounds 15 ounces and 13 pounds 4 ounces after two tournament days. But, with 26 pounds 3 ounces the team sat in 39th. They kept cutting away at the lead and on day three and tied for 15th with a limit of bass weighing 16 pounds 14 ounces.

“We started out throwing dropshots the first day but we found out that it really caught small fish, but then we switched to a spoon and a big Carolina Rig and that really seemed to get the big largemouth outta the bunch,” Brumbaugh said.

On the final day, the duo brought 19 pounds 14 ounces to the scales with a largemouth beauty knocking the scales at 7 pounds 1 ounce. “We caught it right away actually it was our second fish at about 8 o’clock,” Brumbaugh said.

Brumbaugh and Klotz had success all week throwing the spoon and the Carolina Rig; but, the spoon helped them land the 7 pound 1 ounce kicker.

“You really just had to grind it out, work the baits slow and trust the Carolina Rig,” Klotz said. “Yeah, and you really had to work that spoon hard that’s what ‘Gerry’ did all week.” 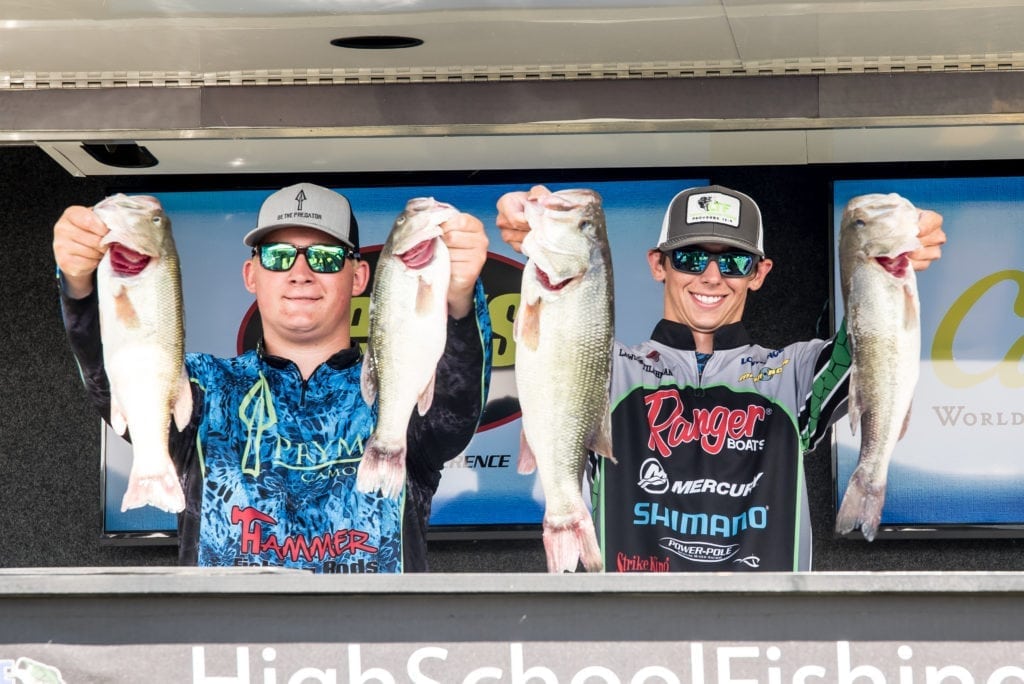 Third place team, Cort Walker and Lawson Tighten from the Hardin Co HS Tigers in Counce, Tennessee were awarded the $20,000 a year for four year scholarship to Bethel University for being the second highest finishing Junior/Senior eligible team. But, turned out the team already had eligible scholarships to Bethel University and so they passed the award to the fourth place finishers. 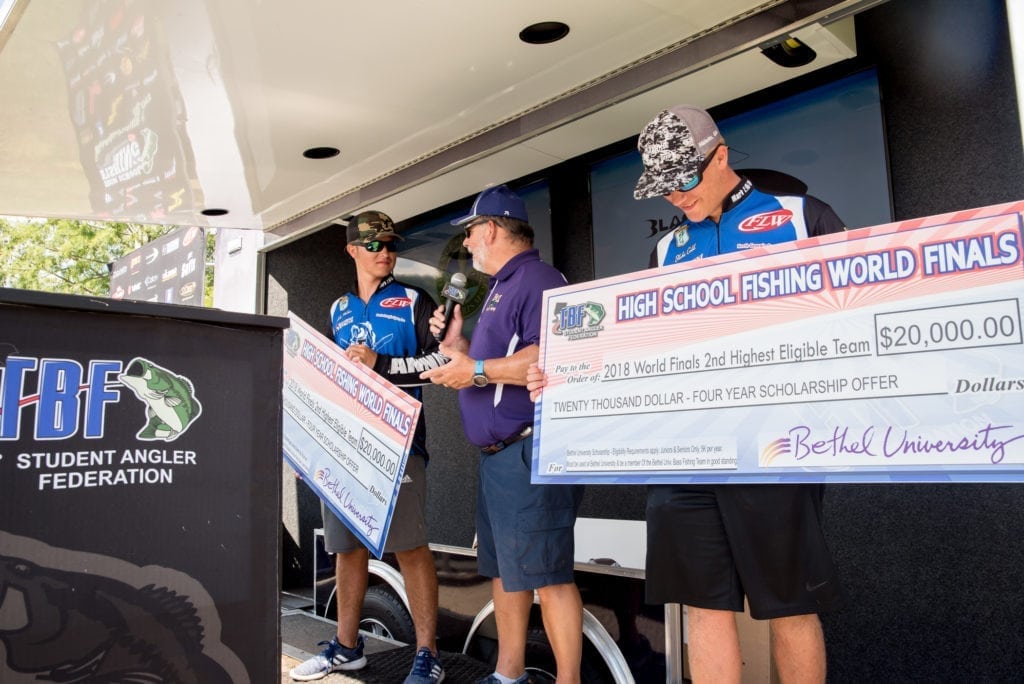 A little bit of shock and awe from fourth place finishers, Luke Mchan and Black Cobb, as they accepted the $40,000 scholarship offer. The Fanning Fishing Club from Blue Ridge, Georgia had a limit of bass weighing 17 pounds.

Top 5 teams in the world standings:

The final day weighin was presented by our sponsor partners at LIVE Target, St. Croix rods and Tournament Trail Ink.