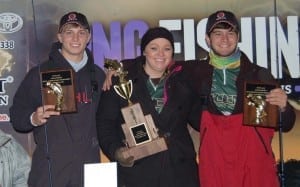 12/17/13 (Sam Rayburn, TX) – 262 two person teams took to the frigid waters of Sam Rayburn reservoir on Saturday morning on the first trail stop of the newly formed Southeast Texas (SETX) High School Bass Fishing Trail. This is the largest SAF High School event that has ever been conducted and shows the true potential of what High School Fishing can become. 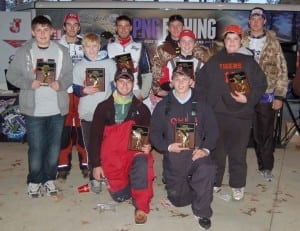 Despite the tough weather conditions which included a fair amount of wind Bryce Rambo and Trent Manuel, representing Little Cypress hauled in the biggest limit of the tournament winning 1st place with 14.24 lbs.  “It was really cold and windy out there,” the team began.  “The fishing was tough.  We tried a lot of spots, but it was hard to find the fish.”  Using a rattle trap, they managed to put a single keeper in their livewell fairly early.  “We lost a big one after that.”  Continuing to various spots, at 9:30am they found one area holding the fish they needed.  It was a spot with stumps and a hard bottom in 10 to 12’ of water.  Trent put three in the boat right away, then Bryce followed suit switching to the same technique using Carolina rigged baby brush hogs and lizards, wrapping up their limit.  “We tried other areas after that but didn’t have any more luck.”  The team won a host of prizes, as well as a $2,139 check for their school organization.  They would like to thank Captain Cory Rambo for taking them fishing, Miss Doyle their school fishing coach and advisor as well as Lews, Ranger, West LTD, Granger Chevrolet, Jordan Marine, Daley’s Hunt ‘n Fish and Simon Outfitters for  their  support.
2nd place was won by Huntington anglers Jace Weeks and Danny Mullins with 14.02 lbs.  They fished deep water with brush hogs for their catch, and Danny Mullins Sr captained their boat.  They earned many prizes and a check for $1,398 for their school club. 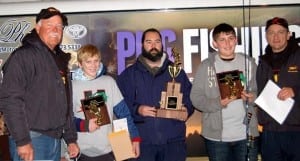 The top 37 teams earned checks for their school clubs and all participating teams earned points toward the championship in May.

John Salamone emceed the event with Ray Beck as the weigh master.  “We are so excited and pleased with the participation in our first tournament,” Salamone began.  “It was originally scheduled to take place at another location, but with the numbers of anglers signing up, we had to bring it to the Umphrey Pavilion to accommodate all of the boats and other traffic we had.”  Getting students paired up with captains to fish the tournament was another obstacle that had to be addressed.  “The people in the fishing industry are unmatched.  We put the word out on various fishing forums of what we needed as far as boats and captains and a few other elements, and 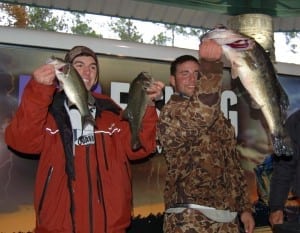 boaters came out of the woodwork to help in every way.  To have our very first high school tournament be the biggest one ever in the country is huge.  It shows the level of interest we have from the kids here in the biggest way.  We are very proud of each and every student that braved fishing on a day like this and cannot give enough thanks to all of the volunteers and businesses that helped to make this a success.  Thanks to all of the community support as well.  The future of tournament fishing is in good hands.”

Lumberton High School was the first in this region to start a fishing club, headed up by fishing Coach Bryan Thomas.  Last year they had 44 members. It is now 81 students strong.  It didn’t take long for other area students to rally for clubs of their own, and it lit up like a wildfire with 28 schools spanning the entirety of Southeast Texas coming on board to form the Southeast Texas High School Association.  Bryan along with Tedd O’Dell and Paul Squire spear-headed the success of this tournament and were the main organizers of this association.  They have been very helpful to other schools as they organize their clubs as well.  Tom Saleman played a huge part in the success of the tournament by providing the weigh in trailer and all relating equipment.

“I am truly amazed that a conversation I had with two young men last October about starting a club at Lumberton has led to SETX being a model for other areas to follow and I am excited about what the future holds for the student anglers of SETX.” – Bryan Thomas