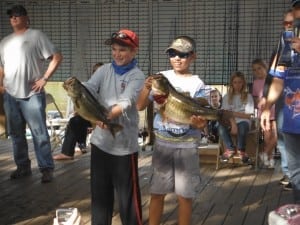 The 3rd annual Bobby Lane Cup once again reached new heights by drawing a record crowd to the rustic confines of Camp Mack. Sixty boats took to the waters of Lake Kissimmee in two divisions. Fifteen teams participated in a Junior High division while 45 High School teams enjoyed the productive waters of the Central Florida Lake that continues to produce some terrific bags of fish! Also adding to the fun were 10 teams from Kentucky’s Rockcastle and Corbin High Schools who made the 15 hour trip and enjoyed the 80 degree weather along with some great fishing! 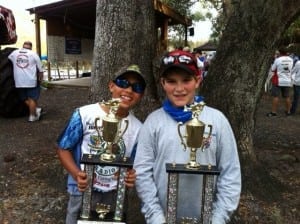 Winning the Jr. High Division were Shane Schmucker  of Lakeland Florida and Louie Eckols of Sebring who teamed up to bring in a terrific 6 fish limit that weighed over 23 lbs. The monster sack was anchored by an 8lb 6 oz. toad that Louie caught on a drop shot rig. “I thought I had a snag because there was just some dead weight when I felt the bite” stated Louie. “I set the hook and he just took off, Shane got the net and we finally got him in the boat” added Louie. The two targeted open water where they found a few rocks as the key to victory. Louie’s big bass also won the Jr. high Division Big Bass Award and qualified for the FWC’s Lunker Catch program. The big bag put the pair in Shaw Grigsby’s boat which served as the Hot Seat for the weigh in.  Once the two young stars stopped smiling they were later seen giving some advice to Shaw, Clifford Prince and JT Kinney who all made the trip to support Bobby Lane and his family who hosted the event along with the Bartow High School Yellow Jackets. 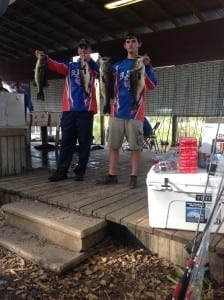 In the High School Division Ryan Thomas and Hunter Gadd set the standard with a 6 fish sack that weighed over 27 pounds to outdistance the field. A 7lb 9oz. beauty anchored the winning bag and also won Hunter the High School Division Big Bass award for the day. When asked if there was any “high fives” when the fish was brought in the boat, both anglers smiled and stated that they were in with some other boats so they kept things pretty quiet. “We worked a Big Easy around the Hiaasen mats to catch most of our fish” stated Ryan as the key to their success. “We only caught 12 or 13 fish today but we had the six that counted” added the pair.

The Camp Mack weigh-in stage was absolutely loaded with prizes and giveaways and the huge crowd of onlookers supported the event by doubling the amount of money that was raised in the charity auction held after the weigh-in.

Special thanks goes out to event organizer Derek Boswell, Bobby and Chris Lane and the host of pro’s, volunteers and sponsors who supported the event.

Here are the event standings: 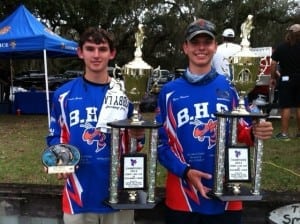