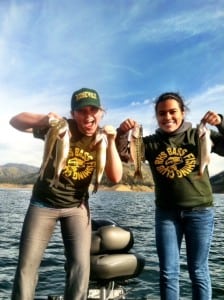 The Roosevelt High School Bass Fishing Club held their third club contest of the school year on Saturday, February 16th, with nine teams competing at Pine Flat Reservoir in the foothills of Central California. While Pine Flat has kicked out the last two world record spotted bass, the lake was particularly stingy on this beautiful early spring day. Yes, February is the start of spring in Central California. The tournament was taken by the team of Reese Raley and Trevor Wells out of Buchannan High, captained by Trevor’s brother Tim, with a 8.26lb bag and Reese’s 2.99lb Tournament Big Bass. Coming in one Big Bass short, was community volunteer Justin Ryan’s Roosevelt High “Girl-Power” team of Corrie Williams and Joscelyn Cervantes with 5.39lb’s of feisty spots.  Tony Vang and Tony Yang, also of Roosevelt and coached by another one of our fantastic volunteers Marty Hooton, took third with four fish going 5.23lb’s. The club now sets its sights on the March 9th event on the rising waters of Hensley Lake in hopes that the big bass will be a little more agreeable. 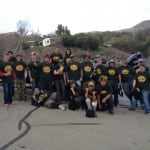 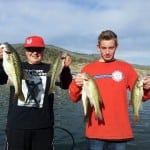