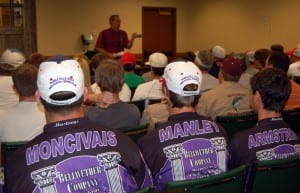 Registration at Cabela's of Allen, TX

May 21, 2011, ALLEN, TX – Registration on Friday night was a drencher, but thankfully it was indoors! Storms rolled through the area as all the Texas High School State Championship anglers gathered in the conference room at the brand new Cabela’s in Allen, Texas. Several anglers from all over the state of Texas registered to fish the inaugural event held on Lake Lavon. Approximately sixteen different schools were represented. Marble Falls High School Fishing Club brought the most teams with six. Willis High School Fishing club brought three teams. Many teams came from as far south as Houston to compete in this first ever state championship. 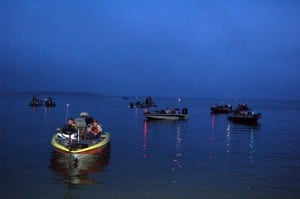 The morning started off great for the anglers. It was a very mild morning and the wind was calm. All anglers and boat captains got in the water and lined up for takeoff at first light. All were out ready to fish by around 6am.

Rockwall-Heath High School Anglers Alec Castonguay and Cameron Elder found their spot and found themselves a 5 bass limit that weighed 15.53 lbs. “We caught all of our keepers by 9:30am. We caught one on a chatter bait because of the shad spawn and the rest on a Texas Rig and brush hogs” said Castonguay. It was enough to make them the first ever SAF Texas High School Fishing State Champions! The team moves on to a regional event to be held this fall in conjunction with the FLW College Fishing. “I’m just psyched out of my mind right now. It’s awesome! I can’t describe the feeling really,” the team said. “We would like to thank our boat captain, without him, we wouldn’t be here to compete”. 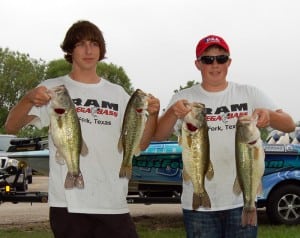 All anglers were given the opportunity to take a free online test at HighSchoolFishing.org about boater safety, conservation and angler ethics, which made them eligible for contingency awards at their state championship. “It’s an industry first by TBF and a tremendous way to emphasize the importance of education to these student anglers,” TBF Youth Director Mark Gintert commented. “The Federation is driven by our desire to promote education through fishing and the testing component is designed to do exactly that. Put this package together with our partnership with FLW Outdoors and the sky is the limit.  These young anglers will have opportunities unlike anything the industry has ever seen.” 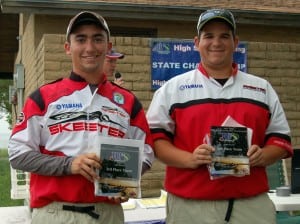 The Berkley 5-Alive Program was implemented at this event. Berkley awards all anglers who weigh in a 5 fish limit, that are all alive. We had four teams meet those requirements which landed them a free bag of Berkley Baits – Alec Castonguay and Cameron Elder (1st Place Team), Trent Newman and Taylor Jones (2nd Place Team), Colby Sydow and Nick Kissamis (3rd Place Team) and Matthew Manley and Shilo Nelson of Marble Falls High School Fishing Club.

Careco TV sent a cameraman to cover this event. They covered the registration, take-off, weigh-in and even got some on the water coverage of our anglers catching fish. Portions of this event will be highlighted on Versus in the near future. Stay tuned for more information when it will air. 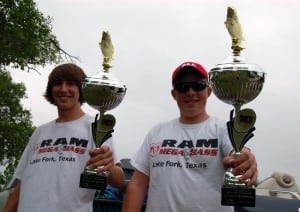 All teams who entered and competed at this event qualify for the largest event in high school fishing, the 2011 High School Fishing World Finals, July 18-23 in Russellville, Ark. (at no extra cost), to compete for thousands in college scholarships and prizes. Additionally, it is open to any and all high school fishing teams who would like to come and compete. If you are not SAF members, you will just need to pay a $50 team entry fee. For more information regardingthe 2011 HSFWF, please visit our HS Fishing World Finals page on HighSchoolFishing.org.

TBF and SAF would like to especially thank the Texas Bass Federation Youth Director, Clint Farris, his wife Shellbie for taking pictures of the event, their son, Colt Farris for bumping fish; Cabela’s of Allen, TX for allowing the registration to be held at their store; Texas Fish & Wildlife for speaking to our anglers, coaches/boat captains and families at registration AND providing the prize for the Certified Anglers Contingency Award; City of Allen, TX as site host; and all the volunteers who helped make this event happen. And a huge thank you to all the parents, mentors, teachers, coaches and boat captains for getting your students involved with high school fishing! Thank you all! We couldn’t do this without you.