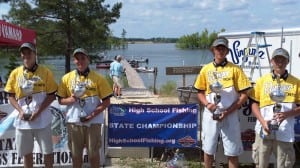 May 21, 2011, Buggs Island VA – The Virginia/North Carolina Student Angler Federation sign-in registration night was hosted by the Days Inn of South Hill, VA. The 19 registered teams showed up to attend the conservation speech given by Vernon Wilson, the Virginia TBF Conservation Director. After that the rules reading, there was group picture and a ton of stuff to give away at this inaugural event for the North Carolina and Virginia High School Fishing State Championships.

The next morning at 6:30 sharp the six teams for North Carolina and 13 teams for Virginia blasted of on a great morning for fishing. 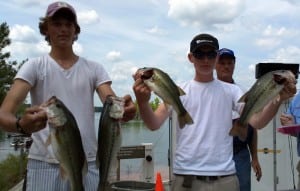 But when the day was over the team of Michael Beverley/Michael McDonald of Fuquay Varian High School in North Carolina with five fish and a weight of 7.78lbs won the NC State Championship. The team of Tanner Blanks/Junior Roberts of Pulaski County High School in Virginia with a five fish limit that weigh 10.12lbs, capture the dual Student Anglers Federation Virginia/North Carolina State Championship on John H. Kerr Lake (Buggs Island). Each of the state winners received a very nice trophy, an Pflueger Echelon baitcaster combo, Berkely  Havoc baits, a spool of Trilene, a TBF sun visor, and a chance to advance to a regional event in the fall. Each of the second place winners received an Pflueger Echelon spinning combo, Berkely  Havoc baits, a spool of Trilene and a plaque. And each of the third place winners received, Berkely  Havoc baits, Trilene line and a plaque.

Big fish was 4.60lbs the team of Dylan McGhee/Franklin Marrs from Orange County High School of Virginia brought to the scales. 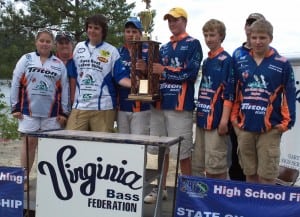 Other notable accomplishments, in Virginia we have the Virginia TBF Volunteer Memorial  trophy that is awarded to the largest combined weight of Virginia High School team. The Orange County Fighting Hornets took the trophy home to display at their school as the 2011 Student Angler Federation Team Champions.

All teams who entered and competed at this event qualify for the largest event in high school fishing, the 2011 High School Fishing World Finals, July 18-23 in Russellville, Ark. (at no extra cost), to compete for thousands in college scholarships and prizes.

Additionally, it is open to any and all high school fishing teams who would like to come and compete. If you are not SAF members, you will just need to pay a $50 team entry fee. For more information regarding the 2011 HSFWF, please visit our HS Fishing World Finals page on HighSchoolFishing.org.

A big thanks to all the sponsors Berkley, rods and reels and volunteers that help put this event on. All the kids was given a goody bag and the night of the registration the drawing gave kids Berkley Havoc baits and a couple kids won a Berkley fish rod combos.

Thanks to Jerry Wright, Mike Gunn (State Youth Tournament Director),  Vernon Wilson (State Conservation Director), all the boat captains and The Days Inn of South Hill. And a huge thank you to all the parents, mentors, teachers, coaches and boat captains for getting your students involved with high school fishing! Thank you all! We couldn’t do this without you. 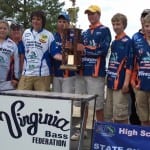 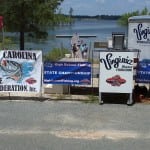 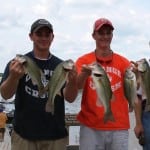 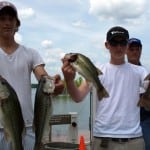 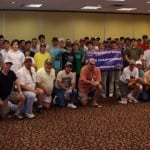 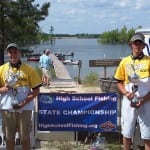