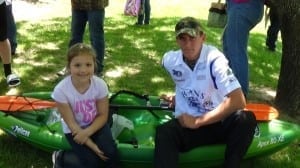 The morning of May 4th, 2013, the Rains High School Fishing Team members were up and around well before daylight.  They gathered at the Ruby McKeown City Park in Emory, Texas, for a full day of activities.  This time though, the high performance bass boats and state of the art fishing electronics were left at home.  This day, the RHS Fishing Team assembled to “Give Back” to a good cause and the community that has so graciously supported them in 2013.  In conjunction with the Founder’s Day activities, the Rains Wildcat Fishing Team hosted the 1st Annual Kid’s Fishing Derby!

All children registering received a complimentary tackle pack to take home or start their morning with.  Cool temperatures in the low 40’s greeted our (28) young competitors, ranging in age from (3) to (13).  Excitement, adrenaline, and visions of catching numerous fish warmed them as the qualifying round kicked off at 8:00AM.  Up for grabs were the Top 8 positions moving on the championship round and a chance to compete for the Grand Prize of a youth fishing kayak.  In addition to the existing population of resident bream and bass, the RHS Fishing Team, with Texas Parks and Wildlife approval, acquired (200) channel catfish that were introduced into the city park canal just days before the event to ensure the catch rates would be plentiful.  The Fishing Team also provided the live bait, hooks, rods, reels, and weigh-in logistics that made this event all possible.  The children fished in the qualifying round for a period of (90) minutes.  During the qualifying round, the fish did not disappoint as (113) fish were brought to the scales by our young contestants including (17) by tournament leader, Bailee Breaux.  At the close of the qualifying round, a brief intermission of (1) hour was observed for Founder’s Day Parade festivities from 9:30 to 10:30AM.  Filling the Top 8 positions and moving on to the championship round included the following:

To start the championship round, all weights were zeroed and our young competitors were then partnered with one of the Rains Wildcat Fishing Team members to fish together for the final (90) minutes.  Bailee Breaux partnered with Dilan House wasted no time at all continuing her onslaught of the small catfish by bringing the first fish to the scales just minutes into the round.  Kyle House, partnered with Nick Grell, fired the second shot by bringing a fish for weigh-in.  Emersen Prinz and Trey Rogers followed next before Bailee returned to the scales with her second fish.  Spencer Lovell partnered with Rhett Rabenaldt scored next, followed by Samantha Breaux and her team partner Dillon Gossett.  Although squeaking in championship round, Jameek Pryor partnered with Jackson Case brought fish for weigh-in next.  Kameren Kennedy partnered with Hunter Dickens and Amery Prinz paired with Cody Dodson rounded out the pecking order for weigh-in.

As the Battle on the Canal unfolded, it was evident that Bailee Breaux had lost no momentum from the qualifying round as she continued to pull away from the other competitors bringing in fish after fish.  Jameek Pryor made a strong run at her before waning in the last (20) minutes.  Kyle House saw a flurry of activity and bolted to second place for a period of time.  Bailee Breaux approached the weigh-in scales one last time with (2) fish that weighed 0.19 pounds.  At that point, everyone thought the contest was over.  That is everyone except Emerson Prinz.  Emerson had been quietly catching and holding fish and was within ounces of catching the leader after weighing in a stock piled 1.33 pounds at one time.  With less than (3) minutes left, Emerson approached the stage a final time with a fish she hoped would put her on top.  Everyone held their breathe as the weight was recorded.  That final fish weighed .09 pounds and left Emerson just (6) one-hundredths of a pound short of Bailee Breaux’s total weight.  Therefore, Congratulations go out to Bailee Breaux as she was crowned our First Annual Kid’s Fishing Derby Champion!

The Rains Wildcat Fishing Team would like to thank all the contestants, parents, grand-parents, and the crowd of onlookers that either participated in or cheered on our young competitors.  We would also like to thank the Founder’s Day Committee for allowing us to be a part of the Founder’s Day Activities.  We hope to be invited back next year.  All proceeds collected from the $3.00 per contestant entry fee will be donated to the selected Founder’s Day Charity.  On behalf of the RHS Fishing Team Student Anglers, it feels good to “Give Back” to the community that has so graciously supported us. We extend a very heart felt “Thank You” to the City of Emory, Rains County, the Greater Lake Fork Area, and all of our Team Sponsors for supporting our efforts and making our Inaugural Year in competitive High School Fishing a huge success!