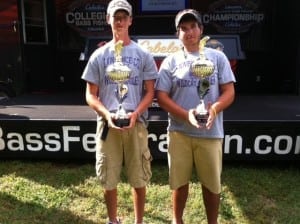 Saxton Long and Triston Crowder had been dreaming about fishing a high school tournament! They finally got their chance as they won the Tennessee High School State Championship in their very first high school tournament with a five fish limit that weighed in at 15 Lbs. 4 oz. to edge out Hayden Everett and Dustin Mayton from Oliver Springs High School who also had a five fish limit of 15lbs even to finish second.

“This may be our first tournament, but I think it just goes to show you that this sport is all about putting fish in the boat,” commented Triston. “We had a limit of fish at 1:30pm and we came upon a spot that was loaded with fish,” added Long. We caught 10 keeper fish in the last 30 minutes that enabled us to cull up our weight,” commented the smiling pair who will advance on to the Southeast Conference regional competition at Lake Lanier Georgia on October 12th. 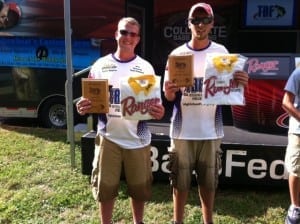 Everett and Mayton actually had the misfortune of a dead fish penalty on a nice Nickajack largemouth that was deep hooked that cost them the victory. The pair took their second place finish in stride as they commented, “Man that’s just fishing I guess, he hit the bait hard and swallowed it so there was not much we could do about that.”

Finishing third was Creekwood High School team of Christopher Richey and Dalton Harper who also had a very respectable 5 fish limit that weighed in at 14lbs 13 oz.

The 70 boat field was treated to great registration dinner and goodie bags by the City of Kimball who served as hosts for the event that went out of Shellmound Park near the dam of Nickajack reservoir.