The Student Angler Federation (SAF) High School Fishing State Championship for Indiana was held at Hoosier Hills Marina this past weekend.  Anglers from all across Indiana came to Patoka Lake to participate in the event.  The talk during Registration on Friday night was about how tough the lake was fishing and how not very many fish were being caught since the recent storms had rolled through and dropped a lot of rain throughout the lake.  Saturday was an overcast day with a few light sprinkles that gave way to a breezy partly cloudy afternoon Weigh-in.

The Scottsburg team of Kaden Raichal and Chandler Marcille squeaked out the win with an impressive limit that weighed 19 pounds and 14 ounces.  The IC Anglers team of Wyatt Wise and Aaron Spurgeon weighed 19 pounds and 13 ounces to claim second place.  Third place was another Scottsburg team, Chase Fleenor and Tyler Stewart who put 18-07 on the scales to take the last set of plaques. 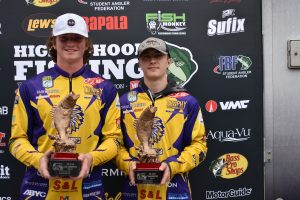 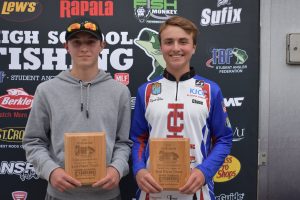 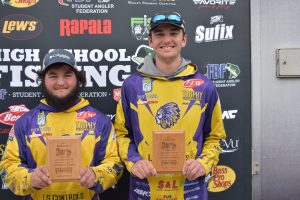 Rounding out the top five teams were the East Central team of Grayson Hylton and Isaac Smith with 15-05 and the Northeast Dubois team of Ty Verkamp and Kaden Bieker with 14-06.

The Lew’s Big Bass award went to the Mishawaka team of Tanner Banks and CJ Stamm for their 6-04 lunker. 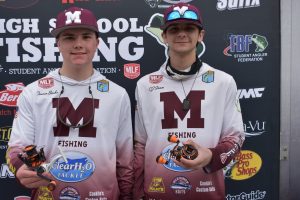 They each received a Lew’s Reel for their catch. 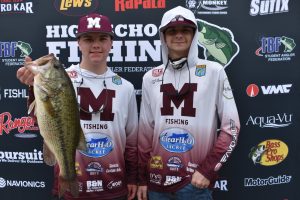 Most all anglers reported that they were catching their fish in shallow water.  Many were sight fishing while others were just fishing down the banks.  Trick worms, chatterbaits, flukes, jigs and Ned-Rigs were all catching fish.  Many team reported catching more that a dozen keepers while other teams reported that it took all day just to get their limit of five fish.