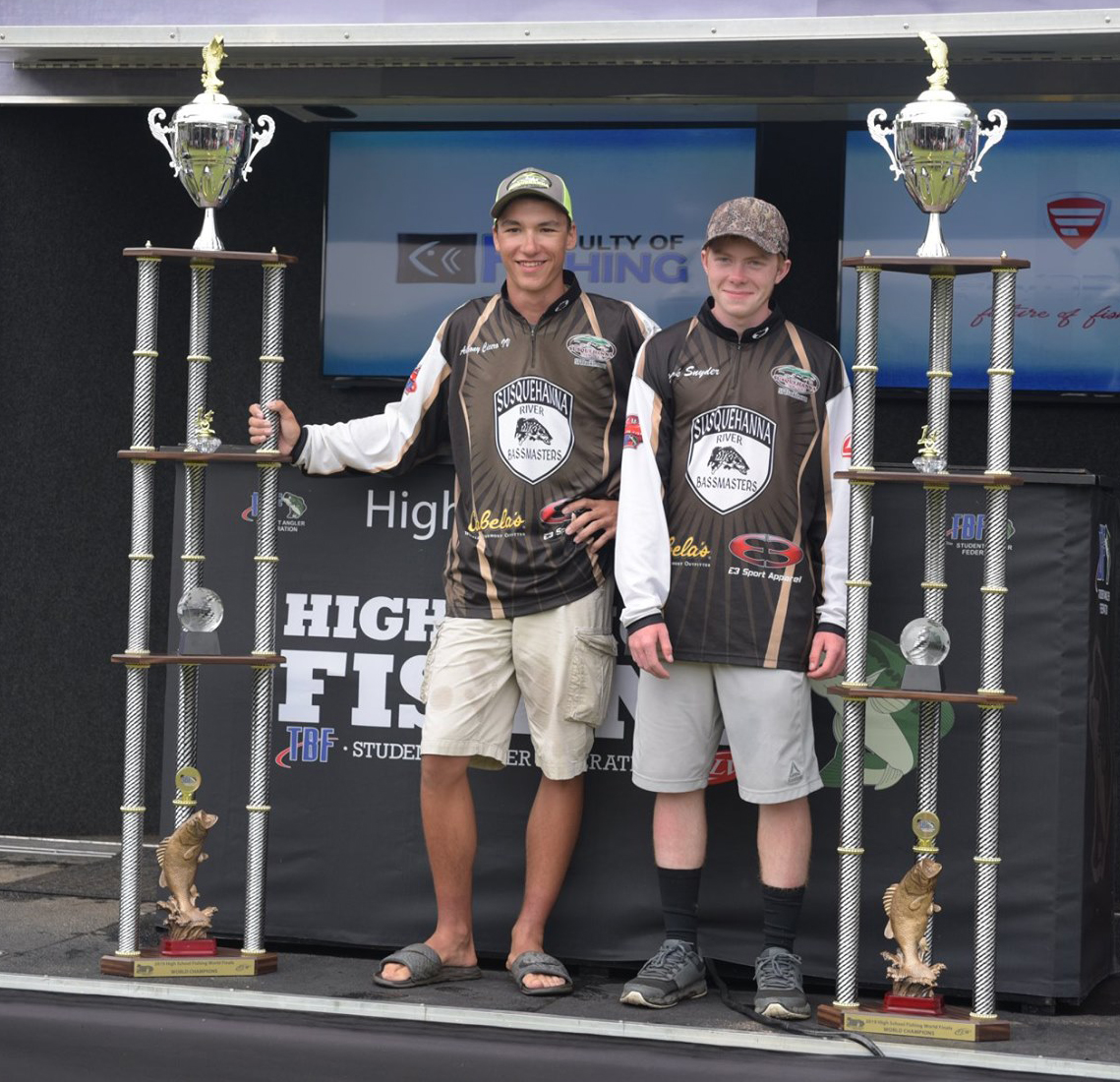 Representing Pennsylvania’s Elizabethtown High School, the hard-fishing duo topped an enormous field of 389 teams from 38 states and two foreign countries — Canada and Zimbabwe — to claim the prestigious World Final Champions crown. Squads were comprised of two anglers and an adult boat captain, pushing the total number of participants to more than 1,160.

With a payout of more than $2.85 million in college scholarships, cash, gift cards and other prizes at stake, competition was fierce. In fact, tournament officials report that the prize purse was certainly the richest in SAF High School Fishing history and likely the largest ever posted in a single event in all levels of competitive bass fishing.

Produced by the Student Anglers Federation (SAF) under the TBF umbrella with support from FLW Outdoors, the popular four-day High School Fishing World Finals and National Championship dual-event format allows families to attend both premier championship events at one time with only one weeks’ vacation. Both events kicked off June 19, with the National Championships concluding on Friday and World Finals wrapping up Saturday.  All anglers to compete for three days, with a second-chance round designed to keep everyone in the game until the final-day cut.

Saturday’s field included the 10 National Championship finalists, the top 10 teams from Friday’s World Finals semi-final round, and the next 10 teams (highest day-three weight) from the semi-final round and second-chance rounds combined. A Friday night pizza party, which saw competitors devour more than 350 pizzas, included a “Lucky Dog Last Chance Wildcard” drawing for one team, not already qualified, to compete on day four – bringing the total number of teams competing in the World Finals finale to 31.

Targeting the Mulberry Creek area, near Kroger Island, the team zeroed in on shallow grass with woody cover and hooked bass in depths ranging from 8 inches to five feet.

One area was particularly productive. “We were fishing a stump where we had caught a couple in practice. We caught our three best fish there today and ended it all,” Cicero reported. Anchoring their limit was a 7-7 behemoth that earned Big Bass honors.

Snyder noted that they enjoyed their fastest action throughout the tournament during the morning hours and in overcast conditions—a trend that continued on the final day.

“This is an amazing opportunity,” he said. “The doors are wide open right now to three great schools, and I have a lot of thinking to do.”

TBF President and CEO Robert Cartlidge said providing such educational opportunities to youngsters who love fishing was a motivating factor for event organizers, and he praised supporters of these efforts.

“It is great to see our sponsor partners and these universities supporting young people in outdoor sports,” he said. “This is one of the reasons why we founded the national high school program in the US back in 2007, so that young anglers could live their dream and earn a good education through fishing that would be on par with any other sport.”

“History was made at Saturday’s World Finals awards ceremony, and it was something to see, as multiple colleges and university recruiters were on site, competing for top teams to attend their institutions of higher learning,” he added. “Whatever else happens, that is a success for these young people in my book.” 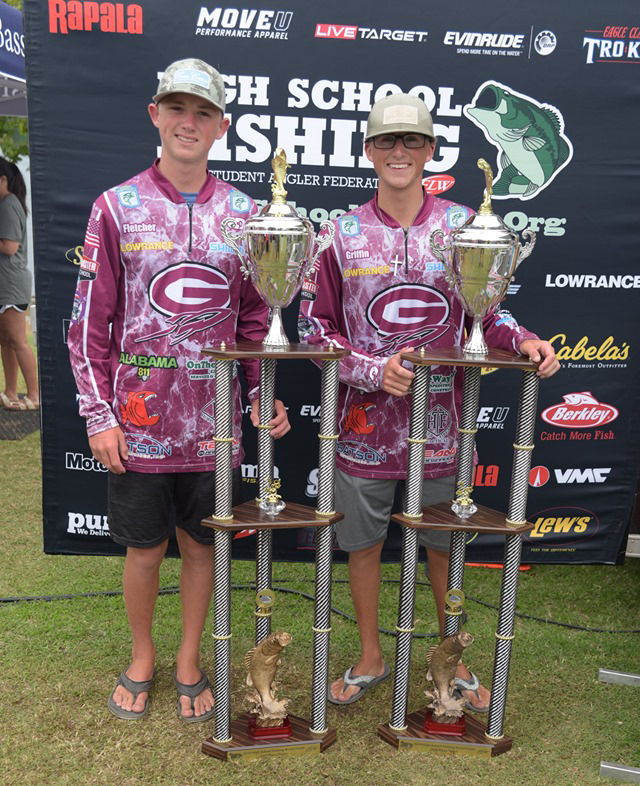 “We had a grassline where we got a few big bites in practice when it was overcast, but because it was sunny when we blasted off, we didn’t think we could get bit so we didn’t stop there,” Griffin explained. “But as we were heading back in the afternoon, our dad (their boat captain) said, ‘You have enough time, you can stop on it.’”

SAF’s long-time partner who has offered scholarships every year for 10 years now. Offered to the winning team 56K – (2) 28K scholarships and to the 2nd place team a 40K – (2) 20K scholarships. 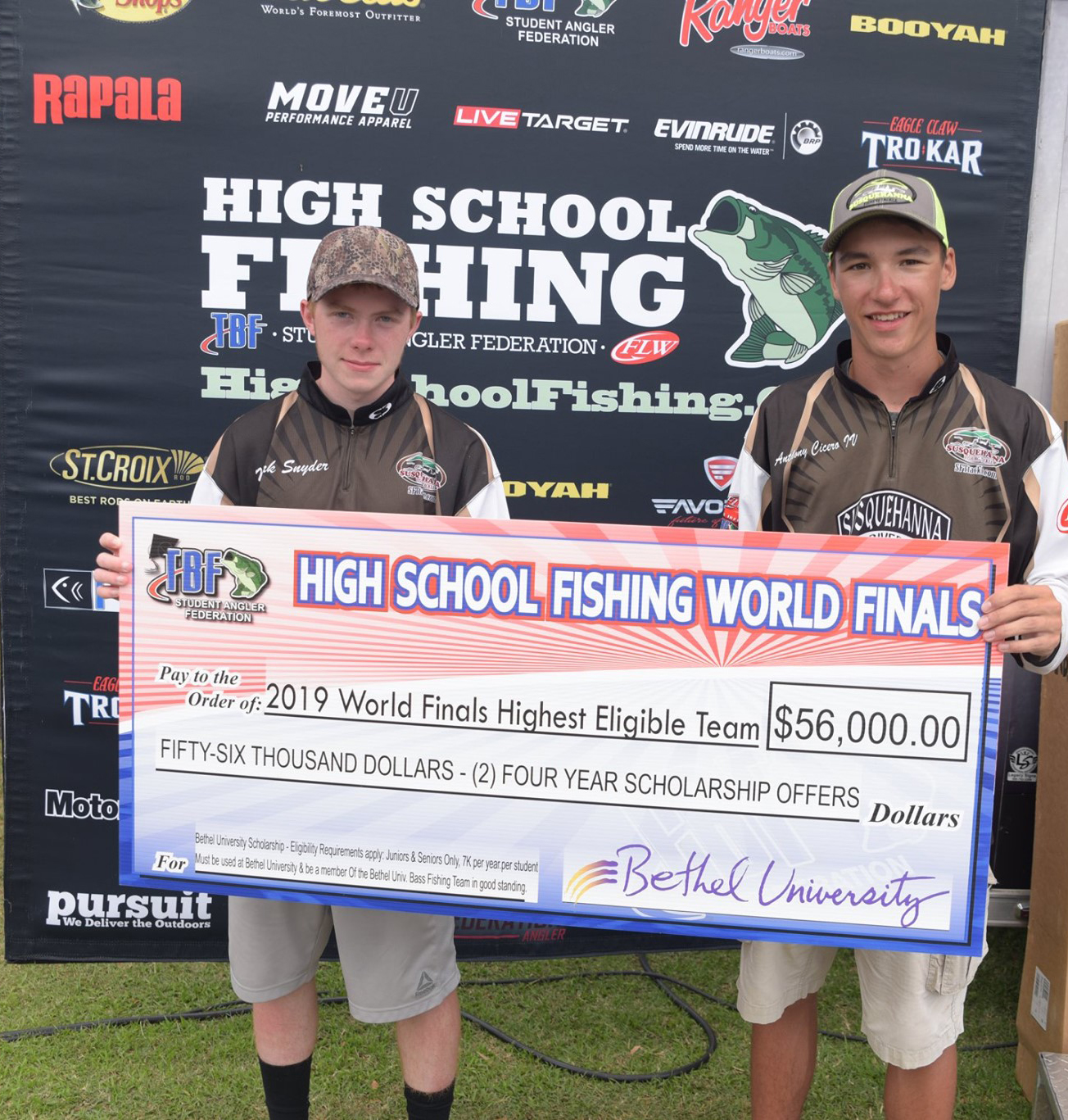 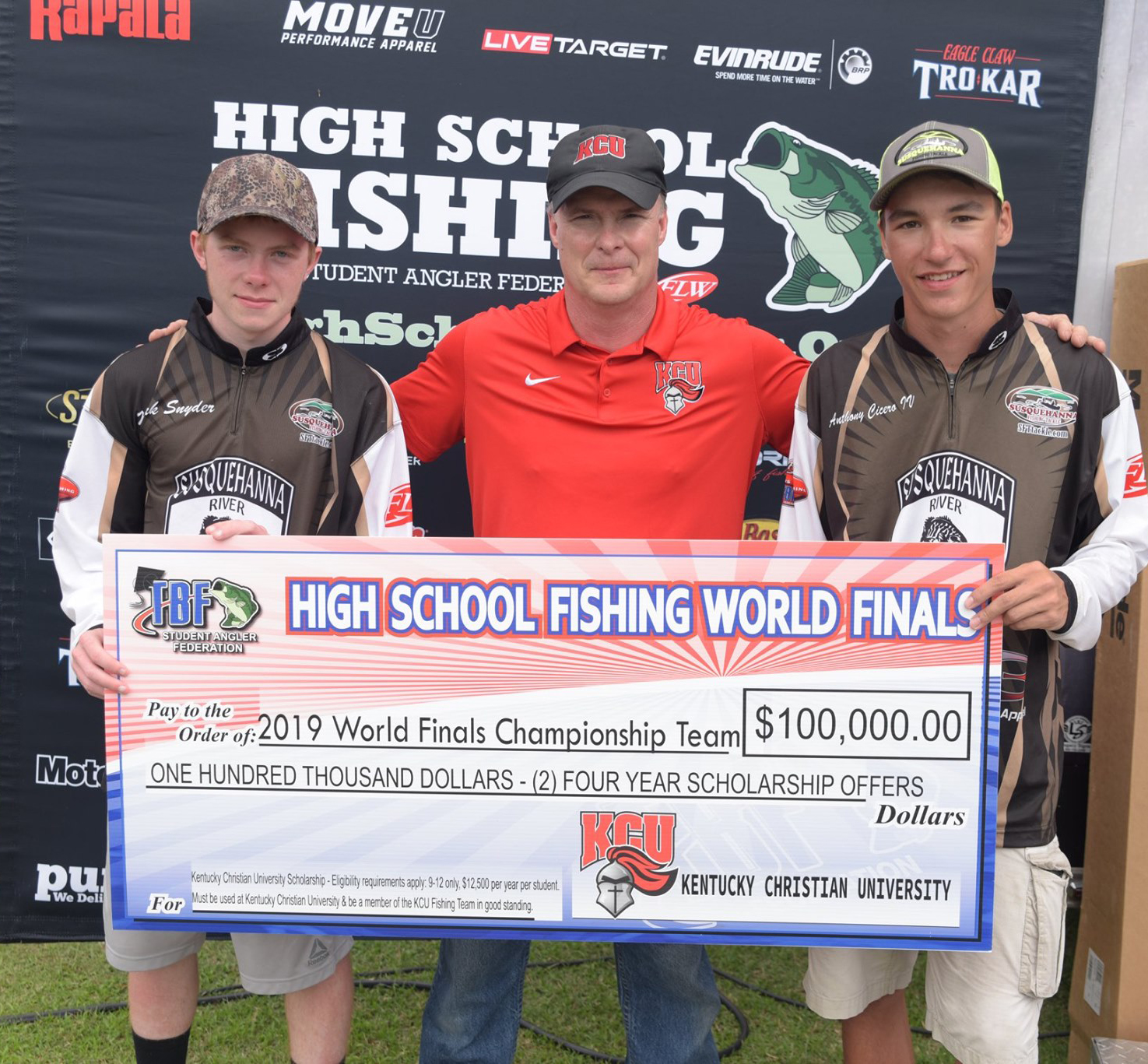 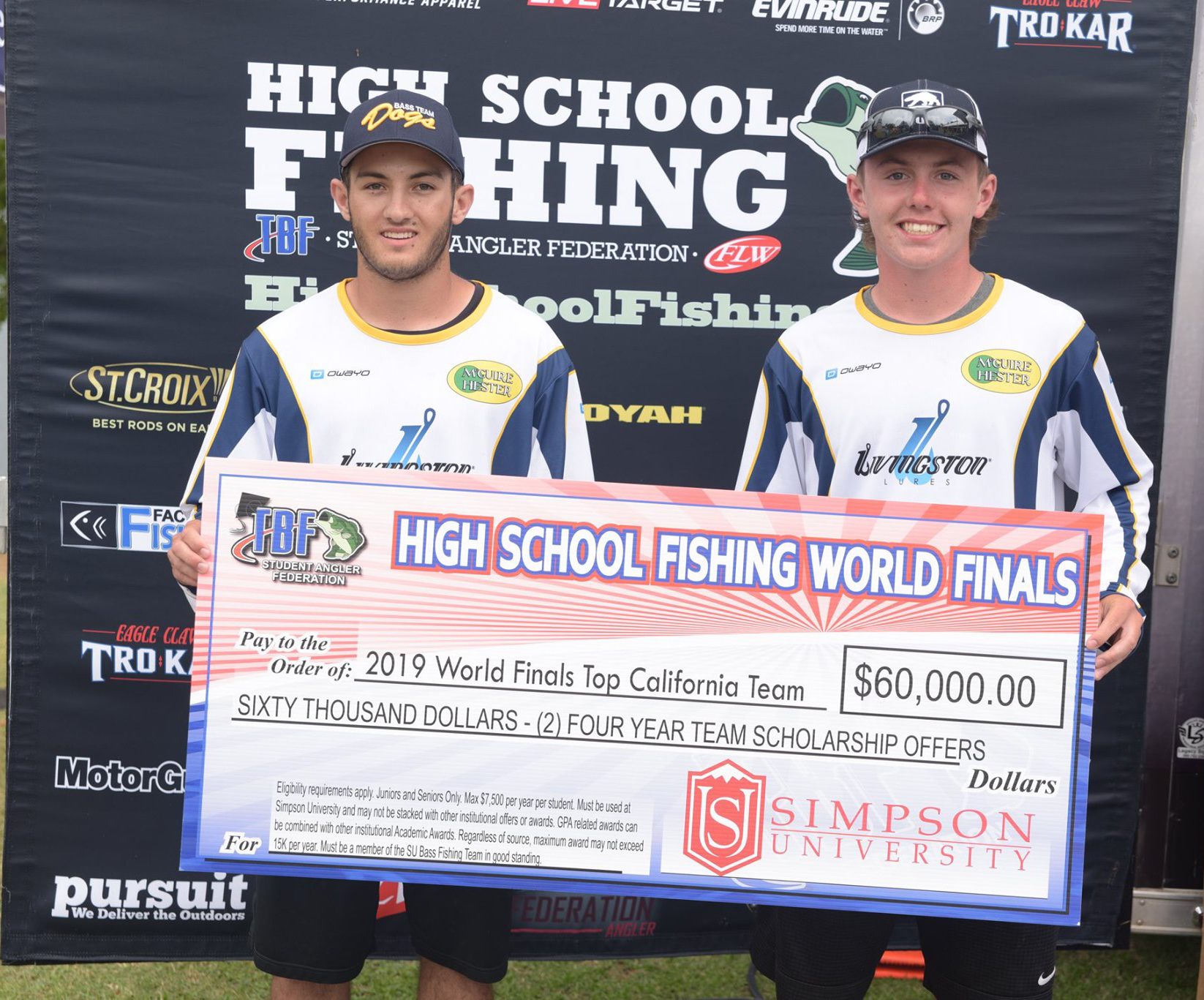 Additionally, Simpson University also offered the Top 10 places in the World Finals a $80,000-  (2) 40K scholarship offers  and  the Top 16 GPAs in the tournament – $5,000 Scholarship award that is stackable with any of the Simpson U awards above.

TBF & FLW also presented their annual cash scholarship offers of $12,000 & $10,000 respectively, and finally over $40,000 in prizes and sponsor giveaways were awarded at the event.

For complete results, visit HighSchoolFishing.org. The website also offers information on attending or qualifying for the 2020 High School Fishing World Finals and National Championship dual event, which is set for La Crosse, Wisconsin.