Mathew Davis and Ryley Watson from Coloma HS Commets were the first team to weigh in and set the bar high with 14 pounds and 12 ounces. They were challenged by the eventual third place finishers Garet Tyrell and Nick Bohland from Walled Lake Central Vikings HS with 13 pounds and 5 ounces. However it was the team of Chase Serafin and Anthony Gilmore from Michigan SAF who won the day with a 5 fish limit of 15 pounds and 3 ounces which included the days big fish of 4 pounds and 7 ounces. Overall, every team caught fish. 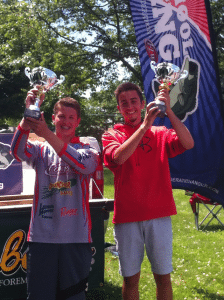