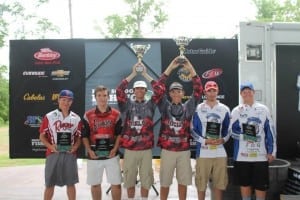 “We had a good limit by 7:00am this morning and were able to cull a few times to get us over the 20lb mark” stated Harrell as the two anglers brought an impressive 22lb 11oz sack to outdistance the 66 boat field at the second annual event.

All three of these teams claimed qualifying berths in the Southern Conference Regional Championship which will be held on the Red River in Shreveport La. later this fall as well as a host of scholarship prizes donated by local companies and groups.

Rounding out the top five teams was Hank Bostock and Calvin Burks from Corrigan-Camden High School who also had a limit of bass that tipped in at 14lb 2oz to finish fourth.

Kyle Dragulski and Austin Dupree finished in a tie for 5th place with Mathew Bowden and Bo McGraw with 13lbs 14oz.

The entire field was treated to an angler celebration block party in historic San Augustine on Friday night. That event provided a great evening of fun for all of those who attended. Saturday afternoon offered all of the teams a rules meeting/registration party at Broaddus Elementary School near the event host Jackson Hill Marina. All the teams were involved in angler skill games and a drawing for a new Lowrance Locator, a new kayak and a host of other fishing related items.

A special thanks to Jackson Hill Marina and the city of San Augustine for providing a great event for the anglers and their families.