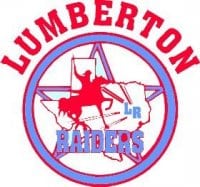 High school fishing in South East Texas got off to a great start on February 2, 2013 as 48 teams took to the water of Sam Rayburn Reservoir.  Participants from 10 different schools were greeted by a chilly morning, but by the 3 pm weigh in temperatures had risen to near 70 degrees.  Teams from Rains High School, Genoa Central, Sulphur Springs, Carthage, Deweyville, Mansfield Legacy, Splendora, Royse City, Corrigan-Camden, and Lumberton blasted off at 6:50 and from all reports enjoyed a great day on the water.

Nine teams were able to bring a 5 fish limit to the scales while only seven teams failed to weigh in a fish.  The Lumberton team of Colton Sims and Zach Johnson came out on top with a limit weighing 15.57 pounds.  They reported catching their fish over grass in 8 to 10 feet of water.  According to Sims, “the fish bit late, we did not have a keeper until after 11:30.”  When asked about the winning technique, Johnson said “we were throwing Rat L Traps.”  Colton was also the winner of the big bass award with a bass weighing 6.24 pounds.  For their efforts, they each took home a brand new American Rodsmiths rod and a $50 gift certificate to Premier Yamaha.  For catching the big bass, Sims was awarded a new Lews Speed Spool reel donated by R1 Bass and another rod from American Rodsmiths.

Second place went to another Lumberton team.  The team of Alisa Moore and Dakota Cline weighed in only 4 fish but they tipped the scales at 14.18 pounds.  Cline reported, “We fished Rat L Traps along the edges of creeks in 9 feet of water.”  “Most of fish bit early in the day,” according to Moore.  By placing second, they each received a new rod and reel combo donated by County Home and Ranch and a gift certificate to Academy. 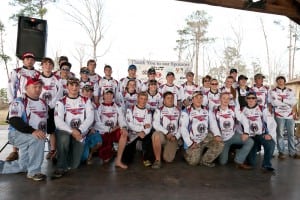 Rains High School captured third place with a limit weighing 13.34 pounds.  The team of Jackson Case and Chance Cobb reported catching their fish in water about 6 feet deep.  According to their boat captain, they rotated through a set of drains and caught their fish on Rat L Traps.  Case and Cobb each received a new tackle box courtesy of County Home and Ranch as well as a casting reel provided by Lumberton High School.

While Rat L Traps seems to be the bait of choice for the winners, others reported catching fish on flukes, crank baits, and spinner baits.  Total there were 109 bass weighed in for a total weight of 257.34 pounds.  I am happy to report that all fish were released back into Sam Rayburn to fight another day.