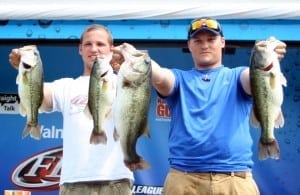 May 5, 2012 – With 16 teams in the 49 boat field catching a limit of fish, the High School Anglers in the state of Kentucky showed the world why they are some of the best anglers in the country on legendary Kentucky Lake. 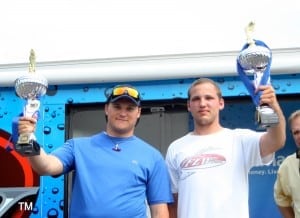 “We fished deep most of the day using a football head jig and crank baits,” stated Ian Heskett who anchored the nice bag with a kicker that tipped in at 6 lbs 9oz. “We had a limit by 8:30 am and then culled 7 or 8 times to keep improving our weight  throughout the day,” added Heskett.  “When I caught that big one, we kind of went crazy for a few minutes, but then we calmed down and got back to work,” added the senior who plans on fishing for the Murray State College Fishing team next year. His partner Chaz Lucas, also a senior, added that the pair has spent a lot of time on the water this spring preparing for this event. “I played baseball since I was in 8th grade,” explained Heskett, “but this year I wanted to concentrate on fishing so I would be ready fish with the Murray State team next year. I think it paid off today!” Murray State was also the title sponsor for the event so it was only fitting that one of their potential new anglers set the stage for the day.

Finishing 2nd was the tandem team of Hunter Smith and Anthony Wilson from Nelson County High School, who also had a great five fish bag that weighed in at 17lbs 15ozs.

In 3rd was the Meade County duo of Tyler Stull and Stephen Compton who also had a fine 5 bass limit that scaled in at 16lbs 7oz. Stephen Compton was the reigning 2011 Kentucky State Champion with last year’s partner Donovan Jones. Compton also finished 6th 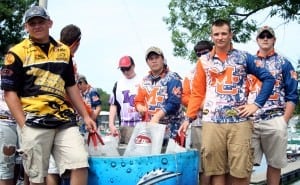