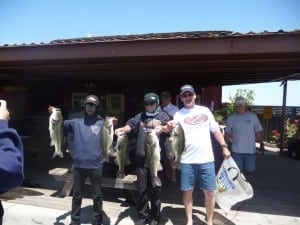 Luke Johns and Brandon Burkey put together an impressive five fish limit of 23lbs 5oz to conquer the field in the 2014 California SAF State Championship. The winning bag was anchored by a 6lb toad that propelled the pair to victory and a regional qualifying berth in the Western Conference Regional to be held later this fall.

Finishing second was Danny Birling from the California Virtual Academy who competed without a partner to bring in an impressive 5 fish limit of 16lb 10oz to also grab a regional spot in the fall event. Rounding out the top three teams was the duo of Brandon Lum and Marcus Gioshi from Roosevelt High School who had five that weighed 15lbs 15oz.