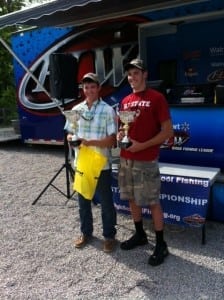 KJ Queen had to find a new partner to replace his sister Chelsea who graduated and moved on to the Bethel University Bass Team but he found a very capable partner in Tyler Black and the pair put together a solid 5 fish limit of 13lbs 5oz to win the North Carolina High School State Championship at Kerr Reservoir. They narrowly edged out the team of Tyler Dunn and Mathew Shrewsberry from Beddingfield High School who also brought in a very respectable 5 fish limit of 13lb even to finish second and claim the second Southeast Conference High School Regional qualifying spot from the 28 boat field. The top 10% of each event advances on in the quest for the 2015 TBF/FLW High School National Championship. 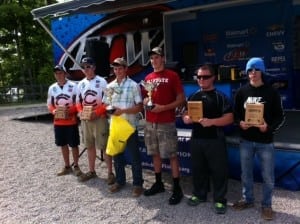 Finishing third was the Carson High School duo of Bobby Bauer and Jake Keever who also had a 5 fish sack that weighed in at 11lb 11oz.

“I used a purple floating worm and a purple jig to catch my fish today” stated Black who was fishing his first High School tournament. “This is really pretty exciting added the sophomore who will now be carrying the Bandy High team forward as the Queen family has graduated from the High School ranks. “I got all of my fish swimming a jig around the bushes created by the high water conditions” stated KJ Queen who like his sister is headed off to Bethel University on a fishing scholarship. The Queen family won the 2012 State Championship and advanced all the way to the 2013 High School National Championship. When asked what the key to their success was the pair responded by saying that staying positive and fishing hard all day carried them to the championship and the Booyah Big Bag award for the tournament. 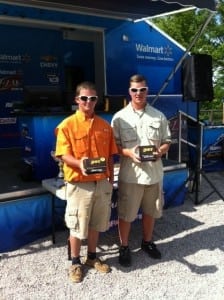 Capturing the Lew’s Big Bass Award was the team of McKinley Puckett and William Hearn who brought in a beautiful Kerr Reservoir Largemouth that weighed in at 5lb 13oz to claim the Lew’s prize package.

Also competing at this event were several young anglers form the North Carolina Bass Federation who were qualifying for the TBF Junior World Championship. In the 11-14 year old division Hunter Martin brought in 4 beauties that weighed in at 10lbs even to advance for the second time to the TBF Junior Program Championship event. Triston Owens captured his fourth title in the older age group by bringing in 2 fish that weighed in at 6lbs 15oz to seal his repeat trip to the prestigious event held every year in conjunction with the Forrest Wood Cup.