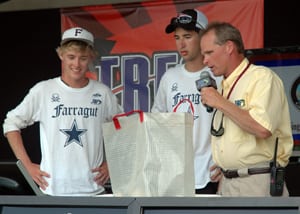 July 22, 2010 – The 2010 High School Fishing World Finals ushered in a brand new world of competitive bass fishing today, as 76 high school teams from 17 states faced off on Lake Dardanelle, in Russellville, Ark. Two Student Angler Federation (SAF) high school anglers per team and some school sending multiple teams came together today to compete in this inaugural event-the first of its kind. All teams will fish two days and then the field will be cut to the top seven teams, weights zeroed on the final day and the finalists will vie for the championship titles, $32,000 in scholarships from Bethel University, thousands in prizes and, not to mention, school pride and all its glory. One team will earn the right to be called the 2010 High School Fishing World Finals Champions, in what is sure to be remembered as one of the defining moments in High School Fishing competitions and The Bass Federation’s 40 years in youth fishing.
More than any other, this event will come down to ounces and each team had the opportunity to gain 12 bonus ounces by doing well on two different written tests. One on Invasive Species/Conservation and one on Boater Safety/Navigation.

For the Farragut High School fishing team, they are ready to get back out on the water. Leading the pack with a five bass limit weighing 15lb 4oz and two perfect test scores resulting in a 12 ounce push are Jordan Burdette and Brandon Merical, from Knoxville, Tenn. with 16lbs total. Burdette and Merical seized the opportunity to weigh-in early, with almost two hours remaining to fish. “We fished only one day of practice; so, the water we found is probably the water we’ll be staying in tomorrow,” Farragut HS teammates said. One crucial addition to their strategy is also what brought them to the scales early. “We figured that was enough to get us into the top seven as long as we can bring in another good bag.” A cushion of only eight ounces separates them from second and less than 5lb from seventh; tomorrow will decide if what they bring will be enough. “We’ll see; hate to count your chickens before they hatch, but we think it will hold.” 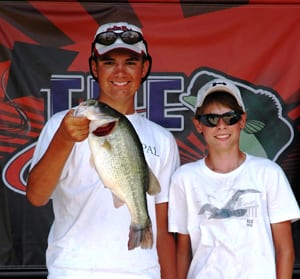 Looking to close the gap, are Jonny Schultz and Thomas Rose, Jr., representing Episcopal Collegiate High School, in Little Rock, Ark. They caught a five bass limit and also got perfect test scores as well, making their total weight 15lb 2ounces. “We had a really good day,” Schultz and Rose said. “It was kind of strange actually; we only caught one fish in four days of pre-fishing, then we got to our first spot and were just pounding ‘em.” The Episcopal Collegiate anglers fished for about two hours during the day to find their limit and are confident in their chances. “We both caught a lot of fish and we’re going to try and catch them the same way tomorrow; 10lbs more should keep us in the top seven for the final day.” However, these anglers were quick to point out. “This is Lake Dardanelle; factors like the water depth and current make it anybody’s game, so, if it’s our tournament, then it’s our tournament.”

Like several high school anglers who came across the stage today, Schultz and Rose were proud to thank their families for support. The SAF and TBF created the High School Fishing World Finals for many reasons, this being the most important, young angler’s and their futures and families. The Episcopal Collegiate anglers echoed that. “We would also like to thank the TBF for giving high school students the opportunities to become better fishermen and better people.”

Full standings can be found here.
Day two weigh-in begins at Dardanelle state park Friday at 2:30, a family outdoors, complete with pro seminars and Range/Evinrude test rides is slated for Saturday right up until the final weigh-in at 2:30. All events are free to the public.