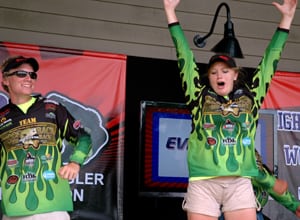 July 23, 2010 – Changes on Lake Dardanelle slowed the bite, but not for some who rose above the pack to solidify their spots on the final day of competition.  These top seven teams advance to battle it out to see who will become the first High School Fishing World Finals Champions.  Tomorrow will decide who goes home with the titles and a prize package never seen in the industry. Champions will receive $32,000 in scholarships-$4,000/yr per winning angler up to four years-from Bethel University, spots on the Bethel University Collegiate Bass Fishing team, which is treated like any other college varsity sport team, thousands in prizes, including $500 Cabelas gift cards, and so much more.  History is about to be made, and two high school anglers future’s changed forever.

With ounces to decide their fate in the top seven final cut, tension mounted.  In the end, Austin Moody and Aimee Cresswell, from Dover High School proved they’re packing the heat, seizing the lead with the tournament big bag of 18lb 10ounces making their tournament total 29lb 15ounces.  “I held my own; my fish was biggest, well until he got the bigger one,” Cresswell said.  “Not even 30 minutes after we pulled out we got our first fish, then not far along we hooked a 5 pounder,” Cresswell’s partner, Moody said.  The Dover High School teammates might have entered the final day in first place, but tomorrow weights will be zeroed and the playing field leveled.  “Our game plan for tomorrow is just to hit ‘em hard, catch a lot of fish, and have fun.”

The High School Fishing World Finals and the Student Angler Federation (SAF) is all about sportsmanship.  Moody and Cresswell give much credit and thanks to Hunter Daniel and Corey McKowan of the Pottsville High School fishing team.  Both teams came on the same water, but when Pottsville found out Dover was fighting for contention they pulled off.  “They let us have the entire area to ourselves and we want to thank them so very much; it’s just awesome of them.” 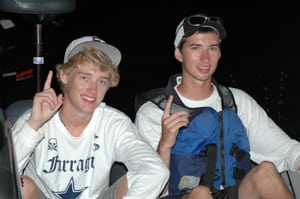 Day one leaders, Jordan Burdette and Brandon Merical from Farragut High School, slipped into the second spot today, but with weights zeroed it’s anybody’s game.  They brought two fish to the scales that weighed a total of 5lb 7ounces making their total going into the final day 21lb 7ounces.  “We want to thank our parents and thank God first for giving us the fish to catch,” Burdette and Merical said.  At a last minute hiccup, the Farragut High School team was short a boat captain and wasn’t going to attend the event.  However, a College Fishing angler from Kentucky, Kyle Raymer, who has a brother fishing the event volunteered to step in.  “Kyle is great; we want to thank him so much.”  They know without the support of their families and the fishing industry none of this could be possible as shouted while leaving the stage, “we would also like to thank pure poison fishing jigs.”

Perseverance is the key for the North Canyon High School team, of Thomas Chambers and Brandon Koon.  They caught five fish today weighing a whopping 15lb 9ounces compared to their 4lb 12ounce catch on day one, making their total 20lb 5ounces.  Chambers and Koon prove it’s never too late to give up.

Jared Raymer and Ethan Snyder from Meade County High School are in fourth with four fish today weighing 12lb 10ounces making their total 20lb 3ounces.  “I’m really proud of how me and Ethan fished today; we fished hard all day,” Raymer said.  Both anglers had a lot of praise for their parents and sponsors for helping them get this far.  They were also very proud for the support from the organizations and volunteers that made it all possible.  “We want to thank TBF and Russellville, Arkansas for all they did this week.  They took all their hard work and made this a really great event for us to fish.”

Tomorrow, everybody’s weights are zeroed; every team and every ounce starts again, as the top seven teams face each other and Dardanelle to see who can come from zero to everything and win it all.