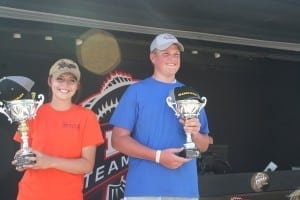 Preston Wiles and Emma Johnson brought in 5 Bull Shoals beauties that weighed in at 11.57 lbs. to win the 2014 Arkansas High School State Championship. The smiling anglers outdistanced the runner up team of lady anglers Brooke Pace and Amy May of home town Flippin High School by the narrowest of margins as the ladies brought in 5 that weighed 11.30 lbs. to claim the runner-up spot. Coming in third was the team of Beau Cantrell and Hunter Lawson from the Lake Hamilton Wolves fishing team who also had 5 that weighed in at 10.99 lbs. 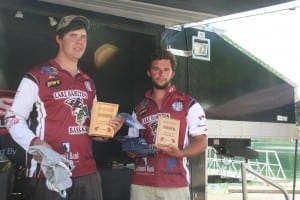 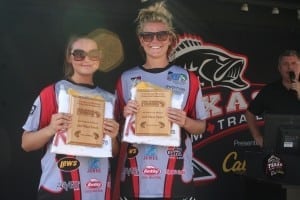 The Lew’s Big Bass winner was the team of Ralston Lusby and Dayton Taylor who had a 3.09 beauty to claim the pair of Lew’s Reels.

Overall 9 teams qualified for the Southern Conference Regional Championship that will be held later this fall. The Bull Shoals Competition proved to be very close as less than one and a half pounds separated all nine qualifying teams.

The following teams will advance on and will be notified of the event details as the event draws closer.