To The Tennessee State Championship

Dylan Fuller and Caleb Conrad were the first team to weigh-in at the 2014 Tennessee State Championship at Dayton Boat Dock on Lake Chickamauga and they posted a huge 25lb 7oz sack that set the bar for the rest of the day on the productive Tennessee reservoir. 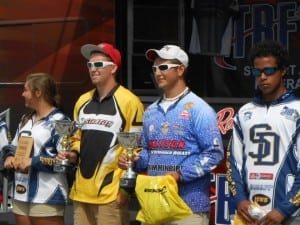 With the largest State Championship field of the 2014 SAF season the pair of incoming seniors led the 124 boat field from start to finish capturing the title and a spot in the TBF/FLW Southeastern Conference Regional Championship in September. The pair also claimed a $10,000 College Scholarship to Bryan College provided by new head coach Michael Keen who is building what will surely be a top notched program in the college fishing arena.

“We caught a lot of fish today on a variety of baits but the bigger fish came on a 5XD and 6 XD’s that we fished in 7 to 12 feet of water” stated Conrad. “We just stuck with it throughout the day and when we caught that big one I felt we were in pretty good shape” added Fuller who brought in the second biggest fish of a tournament, a 6lb 15 oz toad that carried the team to the championship. “I think a few people heard him when he caught that one” stated the smiling Conrad who poked a little fun at his teammate.

Elijah Cartwright and Jacob Thomas were right behind the winning pair with a 23lb 6 oz sack that allowed them to sneak by their Soddy Daisy Teammates Alyssa Coleman and Erica Smith who had a 23lb 2oz limit of Chickamauga Bass to their credit and a third place finish. 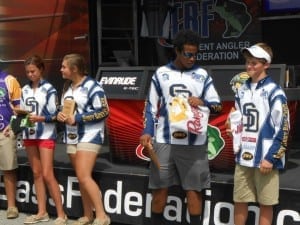 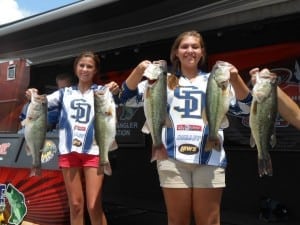 The top 10% of the field advance in each of the SAF competitions, so the state of Tennessee will be well represented with a 12 team contingent advancing on to the fall competition and a shot at the TBF/FLW High School National Championship.

Also coming up big in the competition were the Lew’s Big Bass winners, Shane Broadwell and Bryce Travis who brought an 8lb 4oz beast to the Dayton Boat Dock weigh-in area to win the Lew’s Reel package. (Pictured Below) 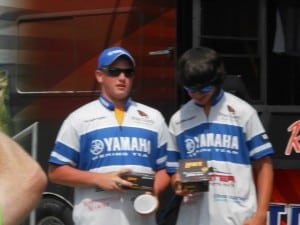 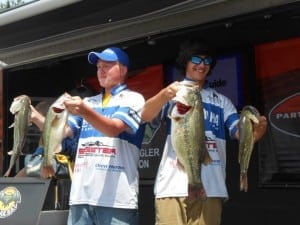 The remainder of the 12 team qualifying field is as follows: 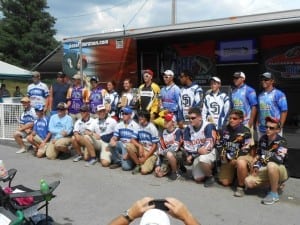 The TBF/FLW High School Championship series continues its trek across the country with upcoming events in Alabama and Minnesota coming up this week.