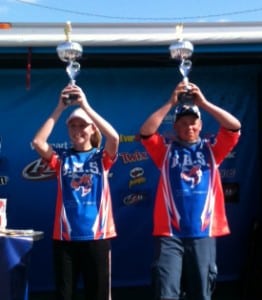 March 10, 2013 – A pair of Bartow High School freshman anglers used a 5 lb 6 oz kicker fish to eke out one of the closest battles in SAF state championship history Saturday at the Kissimmee Lake Front Park and Big Toho Marina. Kaitlyn Boswell and Cole Schmucker  came to the scales with a 5 bass limit that tipped the scales at 14 lbs 15 oz to capture the 2013 Florida High School State Championship, just edging out Seminole High School stars Austin Murray and Travis Kremer by a mere two ounces. Murray and Kremer’s weight of 14 lbs 13 ounces was just enough to squeak by the team of Dustin Bozeman and John Ferguson, who’s five bass limit was also just two ounces behind at 14 lbs 11 oz.

Every ounce counted in this great event that saw 42 teams headed out on to Lake Toho Sunday morning. Only 11 ounces separated teams one through four and six teams brought five bass limits in despite the windy conditions that plagued anglers most of the day.

The young team of Boswell and Schmucker threw swim baits all day to catch a total of ten or twelve fish that they parlayed into the winning five fish limit. “It was kind of a grind and in all honesty I could have just brought one rod with us today as we threw those swim baits the entire day,” added Schmucker who also captured Big Bass Honors with the kicker that put them over the top.

When asked about the opportunity to fish their way into the Regional Conference Championship and possibly on to the High School National Championship the pair both agreed that they would take their scholarship money and head for the University of Florida, a team that has won two FLW College Fishing Championships. 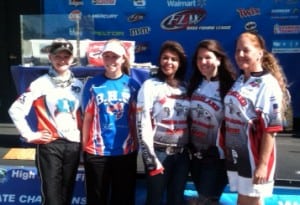 Anglers were treated to a great setup by the Gator Division BFL staff who provided a first class setup for the event and also a visit from Florida Fish and Wildlife’s Dale Jones, who shared that organizations commitment to help grow High School Fishing across the state in the coming year.