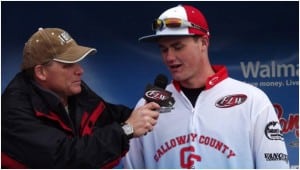 Temperatures in the 20s and icy launching conditions did not hamper the CCHS Lakers as they put nine boats in the water for the 2013 MSU Open Kentucky High School Bass Fishing Championship, held Sunday at Kentucky Dam Marina in Gilbertsville, Kentucky.

Calloway’s Reed Finley, along with Student Angler Federation member, Brandon Oswald, of Saratoga, Wisconsin brought home the first place prizes of $2000 scholarships with a limit of five prize-winning beauties for a total of 25 lbs., 3 oz. Finley hooked the Big Bass Award with a large mouth weighing in at 6 lbs., 4 oz. 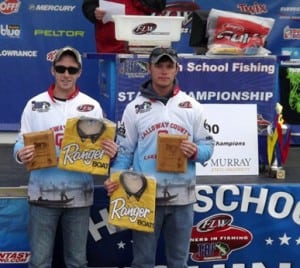 Calloway also placed a solid third with only four ounces separating the senior duo of Bracken Robertson and Dillon Starks with a five-fish limit of 21 lbs. from second place finishers, Mourand and Chessor, from Reidland High School. Robertson stated, “The conditions were brutal today. Water temperatures in the 40s and riding into the wind made for a rough start to the day. Dillon and I pulled together as a team to make it work. We are pleased with the outcome.”

Calloway also reeled in the fourth place finish. The team of Tyler Schanbacher and Jesse Vaught caught their five fish bag limit casting around drop-offs and brought in a total of 20 lbs., 1 oz.

The CCHS Laker Bass Fishing Team placed six teams in the top twenty. A total of 54 teams from six states were entered in the competition.

The Lakers will resume tourney action this weekend as they travel to Lake Barkely to compete in the Lyon County Invitational.