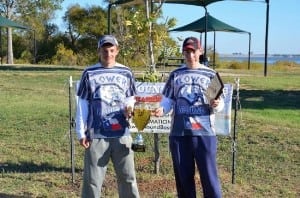 Mound High School Championship Open Bass Tournament.  Conventional wisdom implied that the event would be a disaster.  Only a day before, the first winter blast swept from the North to the South across the Lone Star State, with temperatures plummeting from the 80’s to an overnight low the morning of the tournament of 34 degrees.  A stiff North wind greeted teams as they waited to launch on a miserable dark morning.  As if conditions were not challenging enough, when daylight did break, the anglers were staring into bluebird skies.

Tournament organizers and parents waited anxiously on shore, hoping against hope that someone, anyone, would find some luck and land some fish.   The news broke at 8:30 AM that several teams were reporting fish in the live well.  Cautious optimism replaced doom and gloom.  By 11:00 AM, teams were reporting that they were already culling.  By weigh-in time at 3:30, a large anxious crowd had assembled in anticipation of a weigh-in that would defy all odds.

Sure enough, as expected, each of the twenty teams brought bass to the scales.  Seventeen teams weighed in their limit of five fish.  Smiles and high fives surrounded the weigh-in area as each team took their turn posing for pictures with the day’s bounty.  The tournament Champions won 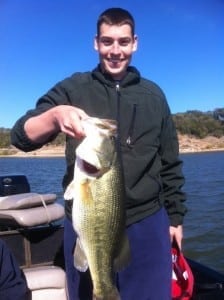 by only a tiny margin.  Bobby Burwinkle and Jason Johnson representing the Flower Mound Hawg-stickers claimed top honors producing a bag that weighed 14.21 lbs.  Right on their heels with 13.2 lbs. were Austin Forrester and Tyler Woods of Saginaw.  Weston Cronan and Jordan Speckels (FMHS Hawgstickers) rounded out the top three with a 10.72 lb. bag. As one might imagine, the “Big Bass” honor went to Jason Johnson (FMHS Hawgstickers) for his 6.75 lb. largemouth that he landed just minutes before weigh-in.  We want to extend a special thanks to the members of the Flower Mound Bass Club who donated boats and coaches to the event.  Without them, the tournament would not have been possible.  To view a library of tournament photos, please visit our website at www.fmhsbassteam.com 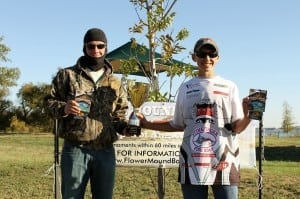 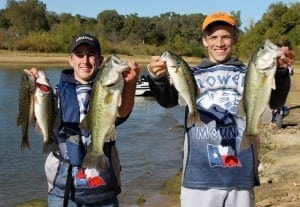